Throwing Jezebel Out the Window

Jezebel is a spirit present in our national discourse right now. Her influence is deceptive, seductive, controlling, manipulative, intimidating, and ruthless. Her effect on believers is an emasculation of their boldness, clarity, and initiative. Men and women of God become eunuchs under the influence of Jezebel. Even her husband Ahab was a neutered leader. A few more symptoms of this influence are:

1 Sam. 14:6-8 – Then Jonathan said to the young man who was carrying his armor, “Come and let us cross over to the garrison of these uncircumcised; perhaps the Lord will work for us, for the Lord is not restrained to save by many or by few.” His armor bearer said to him, “Do all that is in your heart; turn yourself, and here I am with you according to your desire.” NASU

It’s easy to see Jezebel’s influence on business, political leaders, journalism, and the church. Eunuchs line up and to do what they are told and shame others with political correctness (Jezebel’s script). They gladly bow to the demands and the manipulation of Jezebel.

Here’s the good news. The tide is turning against the spirit of Jezebel in our land. When Jehu went to Jezreel (Jezebel’s home) he asked, “Who is on my side.” Then he gave a command, “Throw her down.” It was Eunuchs who threw Jezebel out the window (2 Kings 9:30-37). These same Eunuchs resented their emasculation and were tired of living under the manipulative and threatening leadership of Jezebel. They were ready for a liberator. Jehu was the prophetic voice that ignited their hearts to return to the Lord.

Jehu is a type of Jesus setting captives free. In the spirit, it’s time to take your mask off and say, “I’ve had enough of this.” It’s a season of jailbreak from this oppressive spirit of Jezebel. Awakening is in the air. The freedom of sonship is contagious. The Ezekiel 37 army is being assembled, and you and I are being invited to come out of Jezebel’s prison.

At the moment, few journalists, pastors, politicians, or business leaders are leading this jailbreak. President Trump has been a unique Kingdom voice over the last four years (also a favorite target of those under Jezebel’s influence). Prophets and pastors (the entire church mountain) are hiding in metaphors and spiritual generalities instead of clearly leading on real issues, effectively catering to the spirit of Jezebel predominant in people.

Just as Jehu was anointed to take leadership and remove the wickedness that prevailed in Israel, so President Trump has a similar mandate to “drain the swamp” of Jezebel’s influence in the United States.

Leaders and people in every mountain are just now stirring from their slumber to regain their freedom. God’s spirit is asking, “Are you for Me or against Me?” (Joshua 5:13-15) “Who is on my side?” and giving us this instruction, “Throw her down.” Whether by many or by few, it’s time for sons in every mountain to stand up so this principality can come down.

Here is the biggest secret. Jezebel’s minions have just started to be revealed, some to repentance and turning others to justice and shame. Her network of eunuchs goes around the world, and so does the deep state. The United States is called to be the lighthouse that sets captive nations free from Jezebel’s influence. The warfare isn’t just over you and me; nations are at stake. It is about our personal freedom. It is about inheriting our sonship. But, at a higher level, it’s about the nations we represent. It’s time to take them back! The Kingdom victory that’s coming can’t be stopped!

Psalm 2:8 – Ask of Me, and I will surely give the nations as Your inheritance, And the very ends of the earth as Your possession. NASU 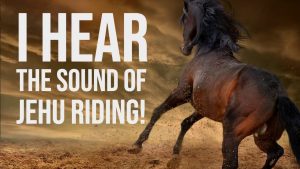 Find the unique purpose that God has written in your heart. Start with the free blog that includes a short video each week. Our latest book gives an overview of God’s strategy for reformation, Intentional Reformation. Your ‘invitation’ to the courses listed below is here.

PS: part of the inspiration for this blog came from a post Gene Redlin put on Facebook. I thought it was very timely.

Bad prophetic utterance comes from linear thinking. At the beginning of 2020 many were prophesying peace and prosperity, peace, and prosperity.

In fact, a golden age is coming. There will be a reset like you’ve never seen before. In the end you will see that Romans 8:28 is true. What the enemy means for evil God is making for good. Will there be difficult times, of course. There always are.

But as you see Satan and his minions trash around with the evil seen in the protests around the world, you know that he recognizes that God’s kingdom is on the March. He is losing.

He is doing all he can do to discredit destroy and discourage people who have named the name of Christ but still live in darkness.

Many have affiliated themselves with this evil scheme in the name of social justice, even many Misleaders in the body of Christ.

They will be held accountable and their mantle will be removed in the days to come. Do not be deceived God is not mocked.

Keep your eyes looking for the glorious turn around that will stun even the most hardened. Do not believe the doomsayers, they are always wrong. 100% of the time.

Be very, very careful about who you are yoked with. What fellowship has darkness with light? Yet many people who think they are bringing light by yoking themselves with evil are deceived and will deceive many.

Discernment is a gift it’s time to use it.

In the twenty-seventh year of Asa king of Judah, Zimri reigned in Tirzah seven days. The army was encamped near Gibbethon, a Philistine town. 16 When the Israelites in the camp heard that Zimri had plotted against the king and murdered him, they proclaimed Omri, the commander of the army, king over Israel that very day there in the camp. 17 Then Omri and all the Israelites with him withdrew from Gibbethon and laid siege to Tirzah. 18 When Zimri saw that the city was taken, he went into the citadel of the royal palace and set the palace on fire around him. So he died, 19 because of the sins he had committed, doing evil in the eyes of the Lord and walking in the ways of Jeroboam and in the sin he had committed and had caused Israel to commit.

20 As for the other events of Zimri’s reign, and the rebellion he carried out, are they not written in the book of the annals of the kings of Israel?

23 In the thirty-first year of Asa king of Judah, Omri became king of Israel, and he reigned twelve years, six of them in Tirzah. 24 He bought the hill of Samaria from Shemer for two talents of silver and built a city on the hill, calling it Samaria, after Shemer, the name of the former owner of the hill.

25 But Omri did evil in the eyes of the Lord and sinned more than all those before him. 26 He walked in all the ways of Jeroboam son of Nebat and in his sin, which he had caused Israel to commit, so that they provoked the Lord, the God of Israel, to anger by their worthless idols.

27 As for the other events of Omri’s reign, what he did and the things he achieved, are they not written in the book of the annals of the kings of Israel? 28 Omri rested with his fathers and was buried in Samaria. And Ahab his son succeeded him as king. NIV

In the thirty-eighth year of Asa king of Judah, Ahab son of Omri became king of Israel, and he reigned in Samaria over Israel twenty-two years. 30 Ahab son of Omri did more evil in the eyes of the Lord than any of those before him. 31 He not only considered it trivial to commit the sins of Jeroboam son of Nebat, but he also married Jezebel daughter of Ethbaal king of the Sidonians, and began to serve Baal and worship him. 32 He set up an altar for Baal in the temple of Baal that he built in Samaria. 33 Ahab also made an Asherah pole and did more to provoke the Lord, the God of Israel, to anger than did all the kings of Israel before him. NIV

30 Then Jehu went to Jezreel. When Jezebel heard about it, she painted her eyes, arranged her hair and looked out of a window. 31 As Jehu entered the gate, she asked, “Have you come in peace, Zimri, you murderer of your master?”

32 He looked up at the window and called out, “Who is on my side? Who?” Two or three eunuchs looked down at him. 33 “Throw her down!” Jehu said. So they threw her down, and some of her blood spattered the wall and the horses as they trampled her underfoot.

34 Jehu went in and ate and drank. “Take care of that cursed woman,” he said, “and bury her, for she was a king’s daughter.” 35 But when they went out to bury her, they found nothing except her skull, her feet and her hands. 36 They went back and told Jehu, who said, “This is the word of the Lord that he spoke through his servant Elijah the Tishbite: On the plot of ground at Jezreel dogs will devour Jezebel’s flesh.  37 Jezebel’s body will be like refuse on the ground in the plot at Jezreel, so that no one will be able to say, ‘This is Jezebel.’”