Luke 12:1-3 – “Beware of the leaven of the Pharisees, which is hypocrisy. “But there is nothing covered up that will not be revealed, and hidden that will not be known. “Accordingly, whatever you have said in the dark will be heard in the light, and what you have whispered in the inner rooms will be proclaimed upon the housetops. NASU

It’s a confusing time right now because God is pulling the curtain back on that which is false. Politicians and big businesses are being exposed for their hidden agendas. The fake news is no longer a flimsy accusation. Our media is essentially a controlled script, and everyone can see the “look here, don’t look there” narrative for sheeple. We have endured false flag events that were staged: the four years of accusations against a president, the summer of looting, the January 6 capital riot, the covid pandemic, the vaccine lies, Afghanistan, etc. God is exposing those who are pulling strings behind the scenes. His justice is unfolding, and a reformation of nations is waiting in the wings for an “awakened” people.

There is another level of purification that is equally profound. Believers are also in the fiery furnace and their true colors are being flown. I recently got an email that made the case that the earth is flat. It came from a friend who is a mature believer with a following. I was amazed that among all the available conspiracy theories, he would choose this one! I was also surprised that in our conversations, there was an attitude of, “My mind is made up!” There was no place for an intelligent discussion. Now I believe this brother will be back at some point, and I will continue to hold him in prayer and stay in contact. My real question for the Lord is, “What’s driving this?”

At an even deeper level, the vulnerabilities in all our hearts are being exposed and dealt with. There is pressure on Christians right now, “What is true and what is false?” is very much on all our hearts. Reality is camouflaged with confusion. Seeing leaders in the government, media, the medical community, and the church mis-lead is shaking sons into a Kingdom that is unshakable (Heb. 12:26-28). Over the last 18 months, many “conspiracies” have proven to be true, and they are intertwined with many more that are false. It is a matter of integrity to revisit our beliefs and discern what is real and what is false. This list will obviously grow, but here are a few examples:

My point is that there is a spirit behind the fraudulent events and beliefs. Being awake to see reality is not just an intellectual experience. Awakening, slumber, and deception reflect on the vulnerabilities in our hearts and our relationship with God. Trials expose our flakiness so we can be healed and genuine. Wokeness is just the religious spirit behind secular humanism that worships itself. There is something similar God is weaning out of believers particularly in the US.

Let’s be more specific – Sons are invited to bring heaven to earth. They (we) can carry great authority and responsibility on earth. We are prewired for exploits, visibility, and acclaim. However, before that promotion can happen, breaking or a ‘death to self’ is a normal part of discipleship. There are no exceptions for sonship. If you are being shaken, it is for a good reason, and it will bear good fruit.

John 12:23-25 – The hour has come for the Son of Man to be glorified. 24 I tell you the truth, unless a kernel of wheat falls to the ground and dies, it remains only a single seed. But if it dies, it produces many seeds. 25 The man who loves his life will lose it, while the man who hates his life in this world will keep it for eternal life. NIV

Our hearts are asking, “If God has called me to be a son, am I called to prosperity, influence, and visibility? …or am I Detrick Bonhoeffer (called to obscurity and martyrdom).” When you get through your own personal shaking, you will lay your life at His feet and accept either path because what matters most isn’t really in this life or in our definition of “success.” We are here to bring His Kingdom to earth. We have bigger fish to fry than our reputation, acclaim, and survival. Detrick died alone on Nazi gallows in the prime of his life… so that all of heaven could applaud his heroism and the fullness of His book could be resurrected on earth and in heaven. He chose well. He volunteered for the good stuff.

When the trials produce this fruit of laying our life down, our me-first is replaced with a genuine heart for our Father, and we will pick it up again (resurrect); and fulfill everything written in our book, and see the fruit of a life well lived – an eternal life! When you make this decision to break and thankfully celebrate what’s in your book, you can finally “be you.” The fruit of this breaking isn’t just humility, it’s the assertiveness of a son to contend and attend to your Father’s business written in your book.

You will no longer have to bulldoze yourself, circumstances, and people to fit an agenda that can’t work. It’s liberating to co-labor in a Father/son relationship and feel His wind in your sails. Your creativity, initiative, authority, courage, and fruit will flow naturally from the clarity of knowing your Father’s purpose. The warrior in you will arise to inherit the nations (Ps. 2:8, Matt. 28:19). You won’t bow before wokeness to preserve a life or a business or a nation with no purpose.

Sons who have bowed and broken in the trials, pick up their lives and spend them on the Kingdom. They have nothing left to lose and everything to gain. It’s called resurrection life; a normal experience in every disciple that comes right after death(s)! Brokenness carries a sweet fragrance that others can detect and follow. It is the stuff of leaders who set captives free from wokeness: Leaders who embrace a vision much bigger than themselves – Reformation. 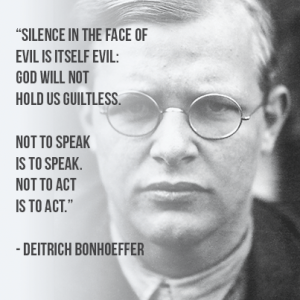