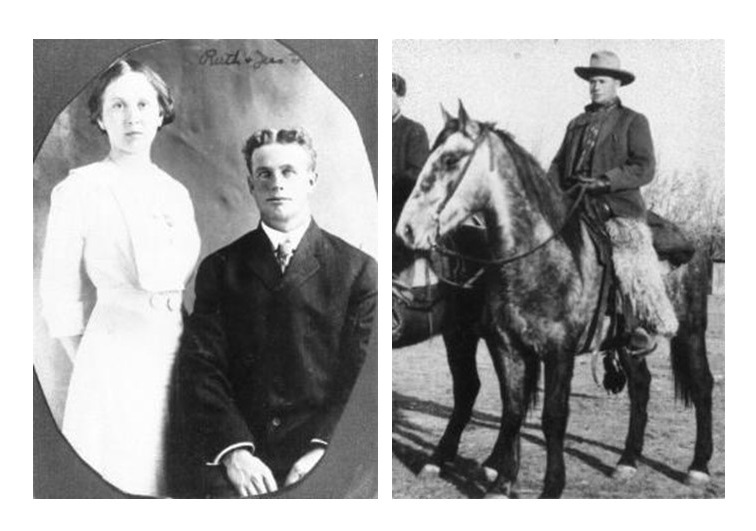 Oscar Calvin Hoover, the son of a railroad conductor, was born in Harrisonburg, Virginia, in 1883. Oscar lost his mother at the age of three, left home in his early teens and changed his name to Jesse Calvin Garfield.  Jesse arrived in Montana in 1904, an eight-year period from when he left home in 1896, and filed on a homesteaded east of Broadview, Montana. Somehow, he picked up significant horse training skills before the age of 21. He broke saddle and plow horses for the homesteaders moving into Montana. Many people related that everyone wanted a ‘Garfield’ horse. To train the plow horses, Jesse would cut trees down in the Bull Mountains and drag them back to his homestead. A well-known neighbor, Ray Sandbak, liked to tell the story about one of Jesse’s trips into Broadview.  As Jesse was on his way home, leading an unbroke horse, a gentleman made an offer on the saddle horse he was riding. Jesse told him if he would help him saddle the untrained horse, he could have his saddle horse in return. Ray often talked about how amazed they were watching Jesse ride the untrained horse, several miles back to his homestead.

As a young man, Conrad Frey enjoyed working for Jesse. He was part of a neighboring farm family who always wore “work shoes.” Conrad never forgot that Jesse bought him his first pair of cowboy boots, a kindness he treasured all his life.

Jesse would bring railcar loads of green horses into Lavina from Miles City, Montana, via the Milwaukee Railroad. On one of his trips to Lavina, he met Ruth Lane, a young lady from Independence, Iowa, who was visiting her aunt. After that first trip to Montana, she returned at the age of 17 to help a friend operate a telegraph office in Ingomar, Montana. Ruth and Jesse were married in 1912 and began their life together on a homestead southeast of Lavina.  The couple’s son, Ford Calvin Garfield, was born in 1913.

In 1915, Jesse in partnership with Herb Belcher, manager and part-owner of the Slayton Mercantile in Lavina, bought the David Fratt Ranch at Cushman, Montana. Herb had the capital and Jesse the horse training skills. Jesse, Ruth, and Ford moved to the ranch near Cushman and established a large horse operation along the Musselshell River. The horses were sold to the military for U.S. Army remount stations and neighboring homesteaders.

In 1917, Herb’s wife, Bessie, decided that she would agree to move their growing family to the ranch. The partnership with Jesse, Ruth, and Ford was dissolved and the Garfield’s moved up the Musselshell River to Slayton while the Belcher family resided at the Fratt ranch. Jesse purchased additional land along the Musselshell and continued his horse operation until he was approached by the founding fathers of Golden Valley County to serve as the County’s first sheriff. On June 24, 1920, a vote to create Golden Valley County was conducted, and Jesse was duly elected with 764 votes. In the general election on November 6, 1920, Jesse was re-elected Golden Valley County Sheriff with 840 votes.

Times were tough for the homesteaders in Golden Valley County. Short grass and little water were the norm and many residents, including James Lampson and his two sons from the Tuffley Bench located northeast of Ryegate, suffered mentally and physically. Complaints were filed from local homesteaders that Mr. Lampson was causing disturbances in the neighborhood.  On December 6, 1920, Jesse, along with Lampson’s neighbors Bill Olcott and Joseph Bradish, went to check on the situation. When Jesse knocked on the door, he was shot in the back by Lampson but was able to get to his car and head to Franklin. The gas tank which had been hit ran out of gas. With help, Jesse walked part of the way, then was transported by wagon, and lastly by another driver to the hotel in Franklin. Dr. Lubeley of Ryegate accompanied Jesse on a freight train to Billings and eventually to the Park Hospital. Succumbing to his wounds, he died two weeks later on December 18, 1920.

The Golden Valley County commissioners held a meeting on January 3, 1921, in which Commissioner Delany made the motion to appoint Jesse’s wife, Ruth, to serve the remaining two-year term of office or until an election could be held. The appointment made Ruth the first woman to wear a sheriff’s badge in Montana. Ruth noted that those two years were extremely difficult. “I had to adjust to Jesse’s death and also raise my son.” Her duties consisted of stolen horses, pool hall offenses, grand larceny, assault, insanity, suicide, foreclosures, notices of sale, search warrants, and bootlegging. When Richard Barr became sheriff in 1922, he asked Ruth to serve as undersheriff.

A Billings Gazette reporter interviewed Ruth in 1966 and wrote of her personality:

“Certainly, I know how to shoot.” The curly-haired 73-year-old pushed back a gray-brown lock with a well-manicured hand. “But”, says Montana’s first woman sheriff, “I never carried a gun.” Her eyes twinkle, and her ever-ready laughter bubbles. “If I had, some man could have taken it away from me.” This was the prohibition ere – the 1920’s – and, the petite ex-sheriff says, “Not too much violence in my county, Golden Valley. Mostly bootlegging, stock rustling and homesteaders fighting over boundaries.”

At the time of her death in 1974, Ruth was living on the Fratt ranch where she and Jesse had enjoyed their original partnership with Herb. Life sometimes comes full circle – as by then, the ranch was owned and operated by her son, Ford, and to this day remains in the Garfield family.