There is another Reformation in the wings. Awakening is part of the process of coming alive to what God is doing. It helps to put this move in the context of the first two:

#1. Jesus came to earth – History records Jesus as an influential figure, a teacher, or a prophet. Christians know Him as God’s son who atoned for our sin. But the first great awakening was the awareness that God Himself came to earth to redeem us. Jesus wasn’t a fall-guy God sent to do a dirty job. He claimed to be God. The Jews understood that point better than His disciples.

#2. Luther’s Reformation – Luther brought us Justification by Faith in ~1500. This reformation gave people access to the presence of God and the word of God. It started with a Renaissance in the arts, a Reformation in the church, an awakening in philosophy and politics, and an industrial revolution that raised the living standards in every nation. The ripple effect was felt for hundreds of years. Access to the Father and His word changed thinking and multiplied creativity.

#3. The third great awakening – The current season is full of national turmoil from politics, covid, the economy, election fraud, etc. Yet, we can see the purpose of God. We are being invited to graduate from access his presence to sharing His works. Just as Jesus did what He saw the Father doing, we’re being invited to do even greater works. We’re being graduated from servants who wait for God to do things, sons share the Father’s heart and take the initiative to implement His purposes. It’s whole different level of creativity, industry, authority, and fruit.

The whole servant to son dynamic is turning the safety of obedience and religion upside down. The partition between natural and spiritual is coming down and those who are awake are not afraid to “think” – a key ingredient for this awakening.

A friend sent me a Yeonmi Park podcast recording (3 hours!). She escaped an oppressive life of starvation under the North Korean dictatorship to eventually live in the USA. One of her biggest transitions was moving from a life of “no choices” to thinking for herself. At one point, she found herself wishing for a supply of potatoes and an opportunity to go back because she found “thinking” exhausting.

Yeonmi’s story is the transition from servant to son. Co-laboring with our Father isn’t our religious tradition of obedience to the bible (evangelicals) or responding to every prompting of the Holy Spirit (charismatics). Sons see their Father’s purpose and choose to own a thoughtful approach to implement that purpose. They are not afraid to multiply talents while servants bury them! It’s called responsibility. Sons volunteer for it!

Why are sons in the game and servants in the bleachers? Sons see purpose and know their Father. They already know there is no condemnation for failure. They know they carry a measure of authority and anointing that makes them overcomers in every enemy encounter. They know if they lose a battle, they will still win the war. They have been in the council and seen Father’s purpose blossoming in heaven, waiting for a son to bring it to earth. Their heart is always, “Here am I, Lord, You can send me.” They know what victory feels like.

Son’s hearts desires are the same as their Father’s – that’s why they are bullet-proof. “In Jesus Name” isn’t a saying we sprinkle like salt on our prayer. It means that as sons we are part of God’s family, and we know exactly what He’s doing. Jesus is not ashamed to call us brothers (Heb. 2:9). Seeking God, thinking, creativity is hard for servants, while sons find those same endeavors fun, adventurous, and rewarding. They love hearing “well done” from their Father.

Sons are “awake.” They can see because they are not too lazy to think:

The Spirit of Reformation – At each of these three great awakenings, there is a renewed spirit of worship. Luther wrote powerful words and music to A Mighty Fortress is Our God. Listen to the spirit still behind it. 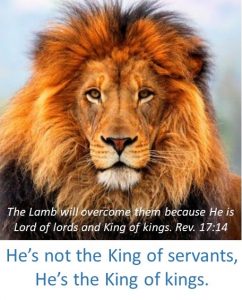