Why So Passive? (Universalism)

I was a little surprised at the sprinkling of believers who will not take a stand for the nation, our heritage, or Trump. Their stance is to justify pacifism no matter what kind of propaganda, revisionist history, corruption, or depravity surrounds them.

Universalism – There is also a minor stream of recently popular theology that believes everyone eventually gets saved (universalism). Their sound is, “God is love, and he doesn’t judge people.” They are also the ones that enforce politically correct speech and shame patriots (nationalism), conservatives (Trumpism), and other Christians (legalistic and judgmental). They self-righteously occupy the high ground of their universalism and believe if the United States becomes a third world country, it’s not a loss for the Kingdom; sort of an opportunity for their light to shine!

If I believe that everyone will eventually be saved, it is very logical that I will excuse their sin. I also would not engage in spiritual warfare because I’m essentially in the camp of ‘there is no evil; there are no enemies.’ Some even take ultimate reconciliation to restoring fallen angels, demons and the devil himself. If I believe we’re all eventually on the same team, it’s not logical to stand against evil or fight for truth; pretty straight forward, right? Is this starting to sound familiar? Just like rapture theology, universalism removes the church from engaging in the culture and the Kingdom.

Pantheism – Military pacifism becomes the order of the day for universalists. Spiritual warfare is also off the table. Why resist evil if there is no evil (or it’s only temporary)? Now we are close to agnostic pantheism (God is a force of nature). If we remove God’s hatred for evil (Pro. 8:13) and His wrath against wickedness (Rom 1:18), we have also removed His justice, His mercy, and His personality. We put God in our theological box so He will behave according to our standards!

Rom. 1:18 – The wrath of God is being revealed from heaven against all the godlessness and wickedness of men who suppress the truth by their wickedness NIV

Rev. 6:16 – They called to the mountains and the rocks, “Fall on us and hide us from the face of him who sits on the throne and from the wrath of the Lamb!

How could Jesus have said such “judgmental” things to the Scribes and Pharisees? We navigate that by telling ourselves, He was just acting under the old covenant when it happened. Did Peter just make a mistake with Ananias and Sapphira (Acts 5:1-11)? The bottom line is that universalists would never do that.

John 8:43-45 – Why is my language not clear to you? Because you are unable to hear what I say. 44 You belong to your father, the devil, and you want to carry out your father’s desire. He was a murderer from the beginning, not holding to the truth, for there is no truth in him. When he lies, he speaks his native language, for he is a liar and the father of lies. NIV

Nihilism – Once a believer adopts universalism as a theological premise, they may be saved, but they are on the sidelines, out of fray. They will gravitate toward a grace that degenerates into nihilism (there is no right and wrong). People in this camp are on a confusing continuum of beliefs that may not go as far as Pantheism and Nihilism, but they simply will not be part of resisting any enemies or causing them to flee, so don’t be surprised, like I was. There were no universalists in George Washington’s army, then or now.

Passive – Universalists will never take a stand against evil, except the kind they think you represent. Their weapons are shame and an air of spiritual superiority. Universalism is silent in the face of abortion, substance abuse, child sexual abuse, illegal immigration, election fraud, graft, poverty, etc. At their best, they will find a way to blame it all on you because you’re the one trying to say it might be wrong (a violation of their nihilism).

Shhh, it’s a secret: Their universalist beliefs are often a dirty little secret they are not upfront with. Want to know another secret? There is a stronghold behind universalism that entraps both believers and unbelievers. It’s not just an opinion or a doctrine. Ultimately, there is a strategy and a spirit behind it.

Sons are courageous – Heaven is coming to earth. God’s Kingdom is being established. All the facets of God’s personality are going to be present in His sons. The Lion of the tribe of Judah is not a pacifist. He is both mercy and truth, justice and redemption. Actions have consequences and doctrines bear fruits. In the face of evil, there is no surrender in sons. 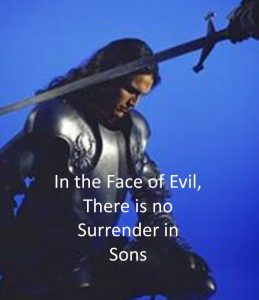 I have not dealt with the topic of violence. After thinking about it, I don’t think we can “universally” say Christians are always non-violent from a theological perspective. Capital punishment, self-defense, war, etc.

I own a 45 auto to answer a home invader that threatens my family. I also set a hedge of protection around my wife and children in the spirit. My choice is not either/or, it’s both/and.

The Lamb of God was non-violent and laid down His life, but the Lion leads the Kingdom, and sons are the violent ones willing to take it by force (and) lay down their lives for a brother. (Study the wrath of the lamb in the Bible)

Laying down our lives for a brother is not the same as surrender to evil. We are invited to resist evil until it flees.

Jesus did not lay down His life in surrender to evil. His death and resurrection was the greatest sting operation in History. He voluntarily gave his life because God so loved the people. It wasn’t surrender; it was co-laboring with the Father to deal a death blow to Satan himself.