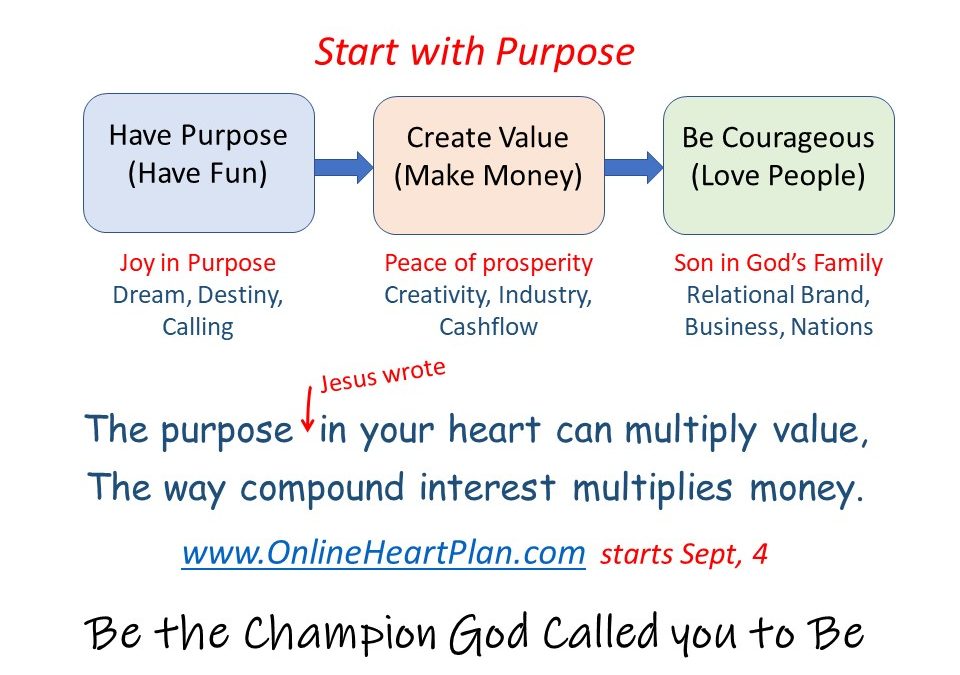 Yesterday, we had a prayer time courts of Heaven with our tribe, and we all repented for thinking too small, not believing for the magnitude of what God has for us in individual books. God is raising up sons right now, and they are more courageous, more able to multiply, and make a difference than we’re used to.

In John 5:19, Jesus said I only do what I see the Father doing. There is a sheep mentality that quotes that verse out of context, and it sounds like this, “I just do what the Lord tells me to do nothing more, nothing less.” When you read down to verse 26, it says the Father has given all judgment to the son and the son judges, whoever he wants to. So, there is some independence Jesus had that was healthy. He voluntarily undertook the Father’s purpose. He didn’t have a list of marching orders every morning from the Father. He went out and implemented the Father’s purpose out of his own initiative. And he got crucified because he was bragging like Trump.

He said he was the Son of God. The Jews understand that better than we do. They understood that he was claiming to be God, which is exactly who He was. He is Immanuel, God with us. That’s who Jesus is.

John 5:26-27 – For just as the Father has life in Himself, even so He gave to the Son also to have life in Himself; 27 and He gave Him authority to execute judgment, because He is the Son of Man. NASU

2 Cor. 3:17-18 – Now the Lord is the Spirit, and where the Spirit of the Lord is, there is freedom. 18 And we, who with unveiled faces all reflect the Lord’s glory, are being transformed into his likeness with ever-increasing glory, which comes from the Lord, who is the Spirit. NIV

So you’re reflecting the Lord’s glory, and you should be proud of that. You should exhibit or exude a confidence and a courageousness in an initiative that is reflective of your Father’s glory. Remember Jesus said in the Hebrews 2:11, He’s not ashamed to call us brothers. He’s the Son of God, which means he is God. And then He’s calling us brothers, which gets confusing theologically, but I’m just saying the error or the adjustment in the spirit that’s being made right now is our Father is gathering sons to himself. He’s raising up sons that all creation has been waiting for. They make huge differences in society. This is not just something to be preached or prophesied, it’s something to be done.

Remember the parable of the talents? There was five talents, two talents, and one talent. And the one guy buried his talents, and God got mad at him. And, the guy that had five talents multiplied them to 10, and the master said, “Rule over 10 cities.” And he’s saying that in the spirit to us right now.

Matt. 25:26-27 – “His master replied, ‘You wicked, lazy servant! So you knew that I harvest where I have not sown and gather where I have not scattered seed? 27 Well then, you should have put my money on deposit with the bankers, so that when I returned I would have received it back with interest. NIV

The master left them on their own. They went out and multiplied their talents. They had life in themselves to do that. And that’s what sons carry right now. This ability to multiply talents and cities, that’s the anointing. That’s the anointing on President Trump. And it’s the most remarkable thing in the kingdom right now that God has elevated this Cyrus or this son to be an example of what spirituality really looks like.

Lots of people are offended by it. They’re running from it. They disclaim it. They distance themselves from it. But that’s what sons look like in this hour. So, the master said to the guy that buried his talents. So you knew that I harvest where I have not sown. And I gather where I have not scattered seed. You knew that. And I want to suggest that you and I should know it too, that the Father doesn’t do everything. He says to ask the Lord of the harvest to send forth laborers. And that’s what the world is waiting for right now; His sons to volunteer and say, “I understand the Father’s purpose, and I’m going to bring it to earth. I’m going to speak Life into it on earth. I’m going to make it happen.” That’s what sons do. That’s the hour that we’re in right now. Do not be ashamed of president Trump, be like him. Multiply and do great things and talk about them. Be the man or the woman of God you’re called to be. You have a book; you have a calling. Stand up into the fullness of that book and be who God called you to be. Be the champion that God calls you to be.

Father, in the name of Jesus, we release sons on this earth. Father, we’re asking that you would empower your people, that you would dwell within us and cause us to magnify the name of the Lord. Father, not just talk about things, but do them, make a difference, bring Heaven to earth, in Jesus’ mighty name. Father, I’m releasing confidence and courageousness in the mighty men and women of God that understood the Father’s purpose and went out and slew Philistines with the jaw bone of an ass. Father, I release that courageous spirit in your people that will make a difference.

And Father, we speak to this nation. We reclaim the authority, the mantle on the United States of American. We release her as the light and the glory of the world. We, we do not relinquish this nation to black lives matter, or Antifa, or socialism, or communism. Father, we’re releasing the light and the glory to the world. We’re releasing this nation to be a habitation for the Father; to be the house that belongs to God, to be the light on a shining Hill that causes nations to come to you. So, Father, we claim this nation. And Father, we bless sons that are arising in the mighty name of Jesus to be the champions that you’ve called them to be. Release, sons of God in the name of Jesus.

Thank you, Lord. We thank you for this hour. For this privilege, and Father, we step into our destinies in the mighty name of Jesus. Amen. Go get ‘em.’

Heb. 2:11 – Both the one who makes men holy and those who are made holy are of the same family. So Jesus is not ashamed to call them brothers.

Acts 7:44-50 – “Our forefathers had the tabernacle of the Testimony with them in the desert. It had been made as God directed Moses, according to the pattern he had seen. 45 Having received the tabernacle, our fathers under Joshua brought it with them when they took the land from the nations God drove out before them. It remained in the land until the time of David, 46 who enjoyed God’s favor and asked that he might provide a dwelling place for the God of Jacob.  47 But it was Solomon who built the house for him.

48 “However, the Most High does not live in houses made by men. As the prophet says: 49 “‘Heaven is my throne, and the earth is my footstool. What kind of house will you build for me? says the Lord. Or where will my resting place be? 50 Has not my hand made all these things?’ NIV