What You See Is What You Get

Now that Seers and Doers is out, I’m asking the Lord “What’s our strategy for helping your people see?” The answer was simple and motivational, “What you see is what you get!” The courts, trading floors and the council all function through a seer gifting. That’s the threshold for bringing heaven to earth – we see what’s available in heaven first and manifest it on earth second.

The broadest definition of a Seer is someone who has something spiritual revealed to him as a vision or dream. Others limit seers to the gift of discernment in the sense of seeing demonic activity. This Kingdom gift is for everyone and is best defined as those who can see what their Father is doing so they can do the same things. The second distinctive of a seer is that it’s someone with the initiative to go look instead of passively waiting for it to happen to us.

John 5:19-20 – Truly, truly, I say to you, the Son can do nothing of his own accord, but only what he sees the Father doing. For whatever the Father does, that the Son does likewise.  For the Father loves the Son and shows him all that he himself is doing. And greater works than these will he show him, so that you may marvel.  (ESV, emphasis mine)

Paul prayed for the same seer release in the eyes of our heart for three specific reasons.

Eph. 1:17-19 – I keep asking that the God of our Lord Jesus Christ, the glorious Father, may give you the Spirit of wisdom and revelation, so that you may know him better. I pray also that the eyes of your heart may be enlightened in order that you may know (1) the hope to which he has called you, (2) the riches of his glorious inheritance in the saints, and (3) his incomparably great power for us who believe. (NIV, emphasis mine)

Our history – Israel spent 400 years in slavery in Egypt. When they got out of Egypt, it was no coincidence that they still had a propensity for falling back into bondage. Even in the Roman period slaves were considered property and had no legal personhood. At the end of Roman rule in 300-400 AD, landowners increasingly relied on serfs instead of slaves to provide labor. Throughout Europe until the reformation and industrial revolution, 80-90% of people were serfs without freedom to leave the landowner’s estate. The Middle Ages was a time of violence. Peasants and serfs were glad to have the protection of the manor lord. In a sense, they were happy to be serfs!

Serfdom in an unfortunate generational heritage for all of us. Serfdom is in our DNA and so is choosing the lifestyle! We’re very prone to relate to God as a serf (masking it in spirituality by calling ourselves “stewards”). Entering the Father’s courts or council as a king and priest is something serfs, servants, and stewards would never do.

Serfs are vulnerable to lies (intentionally gullible, tolerate deception, arrogant, doctrinaire and stubborn). Serfs maintain elaborate and philosophic justifications for their lot in life. Christian and cultural serfs want someone else to rule over them, make decisions for them and protect them from evil by making their lives easy. Politicians and hirelings are happy to occupy those roles. A serf’s identity is usually wrapped around their hireling, poverty, and victim mentalities which are still apparent today (their lives are always hard). It’s an anonymous, meaningless life with no dream and no future with a sense of being left behind or left out of God’s best.

The way out (seeing) – Luther’s reformation paved the way for serfs to become citizens with access to God’s presence. This reformation is an invitation for citizens to become sons with access to share His works as co-laborers and receive their Kingdom inheritance (nations, Ps. 2:8). It’s natural that a serf mentality would not boldly take up his or her seer gift and show up in the courts or council of heaven. But, we can overcome the generational force behind serfdom in the courts of heaven, receive our sight and inherit our priest/king role as sons. Notes from my own court session are here. 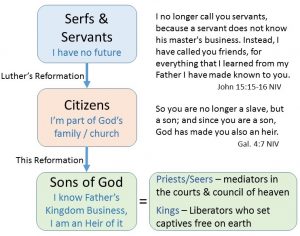 From Serfs to Seers – Entrepreneurs in every mountain are naturally bold, creative, assertive, self-motivated, productive, yet humble. We call them Kings. In this hour we’re being invited to become sons who show the same attributes as priests who boldly come in the spirit realm. Maturity is one way to think of receiving your seer gift. But a better way is to understand that “seeing” is how the Kingdom works and how we relate to our Father. What you see in heaven is what you can receive on earth (WYSIWYG). We are all supposed to be seers. It’s the language of heavenly courts and councils, and it’s a prerequisite for our inheritance in this life.

Gal 4:1-7 – What I am saying is that as long as the heir is a child, he is no different from a slave, although he owns the whole estate . . . So you are no longer a slave, but a son; and since you are a son, God has made you also an heir. NIV (emphasis mine)

Yes, but how do I become a seer?… and why? – We wrote Seers and Doers to answer these questions and reading this book is my best suggestion (get a copy). In a nutshell:

I’m giving myself permission to kickstart the process by using my imagination because I understand my role as a son is priestly in heaven and kingly on earth. All creation is waiting for us to become sons who see and do. We all need to experience seeing in heaven to complete our hearts and our vocations on earth. It’s both spiritual and practical! We are intercessors who pray and see, but we are also manifestors who can produce results.

We need to be both priests and kings who are practical and spiritual entrepreneurs.

Mystery? – What if I’m not seeing anything at first? What if the manifestation of what I do see is delayed? The best place for me is right before my Father in Heaven’s council. I’m listening, looking, asking and being both persistent and patient . . . regularly. Present in the council is a central part of my kingly and priestly lifestyle. It’s a big part of what sons do! And, it’s totally relational and personal instead of doctrinal, legal and complicated. It’s much better caught than taught! 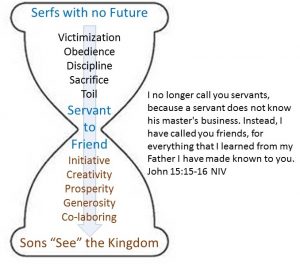