The video introduction to this newsletter is here.

The concept of getting in touch with our heart’s desires and finding our Kingdom purpose has an amazing impact in individual lives. It puts us on the team of making disciples of nations and the kind of reformation that really will touch our culture. I want to suggest that companies, like individuals, also have a unique Kingdom role. If we ask the Lord to show us that role, we’ll probably get a pleasant surprise. The tool we use is called a Heart Plan.

Have you noticed that many companies are under pressure on a variety of fronts to be “socially responsible”? Just producing good products and making a profit are no longer enough. I think that the Holy Spirit is behind this shift in thinking to express the Kingdom Culture! Corporations can play a huge role in blessing nations, and many already do. Making a conscious effort to cooperate with what God is doing in the Kingdom is a huge opportunity to bless others, and the consequence is that the corporation will be even more blessed in return. Biblical wisdom is at the root of wealth creation.

The people who own, lead, and operate a company are really expressing their God-given gifts and ministries in the course of operating that company in the Business Mountain. We are just beginning to realize that churches and missionaries are not the only (or even primary) means of building the Kingdom. God does ministry through … education, government, the media, entertainment, business, etc.

Instead of painting entrepreneurs, CEO’s and corporations as greedy, wealthy consuming giants, why don’t we let go of our own small-minded approach to the Kingdom and release their ministry and invite them in? It’s no coincidence that Christians are more comfortable with the micro-finance approach to entrepreneurial missions. God is just as comfortable with the macro approach, and He was the one who invented the idea of discipling nations… a “macro” approach to reaching the world. CEO’s already think this way. They are carrying a hunger for the Kingdom because the Holy Spirit is inviting them, and they have the macro thinking we tend to lack.

Let’s help those CEO’s get in touch with their own hearts and Kingdom purpose, and then take the same concept into the company. We’re going to lay a foundation in corporations via management teams who all understand and share their heart’s desires and Kingdom ministries. These people and companies aren’t just producing widgets for dollars. Just like the rest of us, they have a Kingdom calling which God is allowing them to choose… and many of them are saying, “Yes, Lord.” The jailbreak has started!

Here’s a picture of the strategy – Let’s move from helping individuals to find their destiny, to groups of people in corporations finding their corporate destiny. It’s not that hard to hear God and put the Kingdom first! Neither is it hard to disciple nations, bless the culture and reel in a reformation. Let’s take those individual Heart Plans for the leadership team and let’s ask those same people what is their Kingdom vision for the company… and see if that isn’t also in God’s heart. Hint – it’s not just about the widgets! 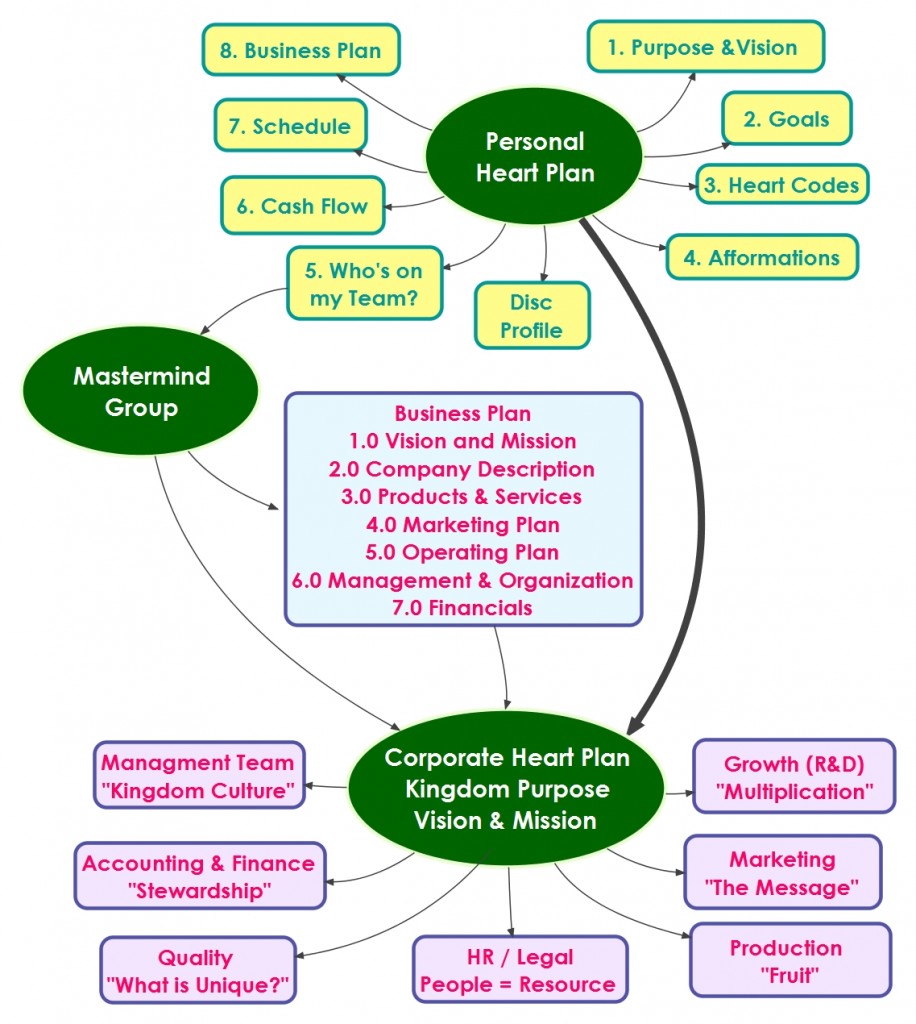 The Org Chart – When we think of the typical functions of an organization, what is it that sets a company apart as “Kingdom”? In the following paragraphs, we will tackle each component and make those observations.

The CEO – God works through leaders. If the guy at the top isn’t connected with his own heart and God’s heart, it isn’t likely that the corporation will connect, either. Said positively, the role of fathering a corporation is full of open doors right now. People are hungry for wise and spiritual leadership that gets results. The motivational leverage to inspire people with Kingdom purpose instead of widgets needs no explanation. The difference is like night and day. Kingdom is about the wisdom of Kingdom principles, but is even more about the person of the King – Jesus. Kingdom moves us from rules and procedures to relationships. The “new” is alive and full of meaning; the “old” is boring and void of purpose.

The Management Team – The first ingredient of a Kingdom leadership team is that they have chosen to work together at a heart level. This means that they understand and respect their individual calling, career goals and talents and those individual heart plans are in writing. They are comfortable promoting one another and they know the reason why. Instead of competing with one another, they are running the race together to win an even higher prize.

Most churches and corporations assume that everyone is loyal to the cause. If someone is found working against the grain, he or she is typically cast aside as a subversive or rebellious element. The real truth is that no one is fully aligned with the corporate mission and “everyone” will eventually leave! Our hearts are continually maturing with mid-course corrections. It’s the job of the management team to instill a Kingdom culture where there really isn’t such a thing as an employee; people are not designed to be servants (Jn 15:15). God designed all of us to operate out of the desires of our own heart… to be creative and industrious because we see the vision at a heart level. That starts when we put individual hearts ahead of the corporate machinery, and simply ask two simple questions: 1) “What’s your dream?” and 2) “How can I help you to take the next step?” That might sound careless, but the result is a Kingdom culture… leaders and staff who are more connected, creative, motivated and productive. When people make a connection between their own hearts and the direction of the company and the direction of the Kingdom, the magic begins. When their hearts take them in another direction, they are encouraged, respected, and released to a better fit. These concepts really do improve the “bottom line.”

Marketing the message – When a corporation recognizes its unique role in the Kingdom, the corporate vision takes on a prophetic quality that becomes the unique selling point to build morale, draw customers and establish priorities. Marketing is all about articulating that level of prophetic destiny that resonates with staff and clients. Steve Jobs convinced himself, tens of thousands of employees and millions of people around the world that Apple computers were designed for people who are more creative. He was building a bridge between technology and a liberal arts education that would change the world… and the world really is a better place because of companies like Apple and leaders like Steve Jobs.

Growth via Research and Development – Growth is inherent to the very nature of the Kingdom. That translates to a corporate vision to continually improve products and expand horizons. The very concept of creating quality products and services is a ministry which blesses people and creates new wealth. Kingdom companies are good stewards of the environment and their people, but they also embrace growth, change and wealth creation. They prosper on every front.

Production & Operations – A Kingdom company is fruitful. The staff can connect the dots between Kingdom value and the corporate products. There is real satisfaction in contributing to the quality and quantity of the product. In a real sense, the daily productivity doesn’t feel like work – it’s a labor of love, an expression of their hearts to put the Kingdom first. There is no higher motivation than to co-labor with our Father… even people who don’t yet know Jesus are drawn to the love and purpose found in the Kingdom. People own the vision because they’ve found the overlap between their own hearts, the heart of the company and the heart of God.

Accounting and Finance – Cash flow is wisely used to project the course and success of the company and to manage risk. When a company or person decides to enter the Kingdom, spiritual warfare becomes one more obstacle to overcome. Financial priorities are set to minimize debt and create a cup that runs over. Kingdom companies don’t necessarily fund other ministries. They regard themselves as a ministry, and carry a sense of mission that is tied to their own calling and ministry skill set. They give themselves permission to carry out their own dream for blessing their staff, community and the mission opportunities to which they are called.

Human Resources – Knowing that people and Kingdom purpose are the company is a value best articulated in the way the corporation treats the staff. They are led, not managed. Salaries and benefits also reflect this value. But the most remarkable difference in a Kingdom company is that hearts are valued, and personal desires are known and released to expand the vision. There is a pastoral quotient in the culture of the management that is not just delegated to the HR department. These companies have a “dream manager” who draws out personal goals, and works to make individual dreams come true, in or outside the company. Kingdom companies are not churches, but they do minister to their employees.

I’ve seen the lights come on for people in conferences, coaching and prayer settings. It makes an amazing difference. We can see the same fruit in corporations. We just have to decide to do it.

Want More – I partnered with Larry Nault to help businessmen express Kingdom through their corporation. Much more here: http://www.buildingakingdomcompany.com/