When the Warfare Starts 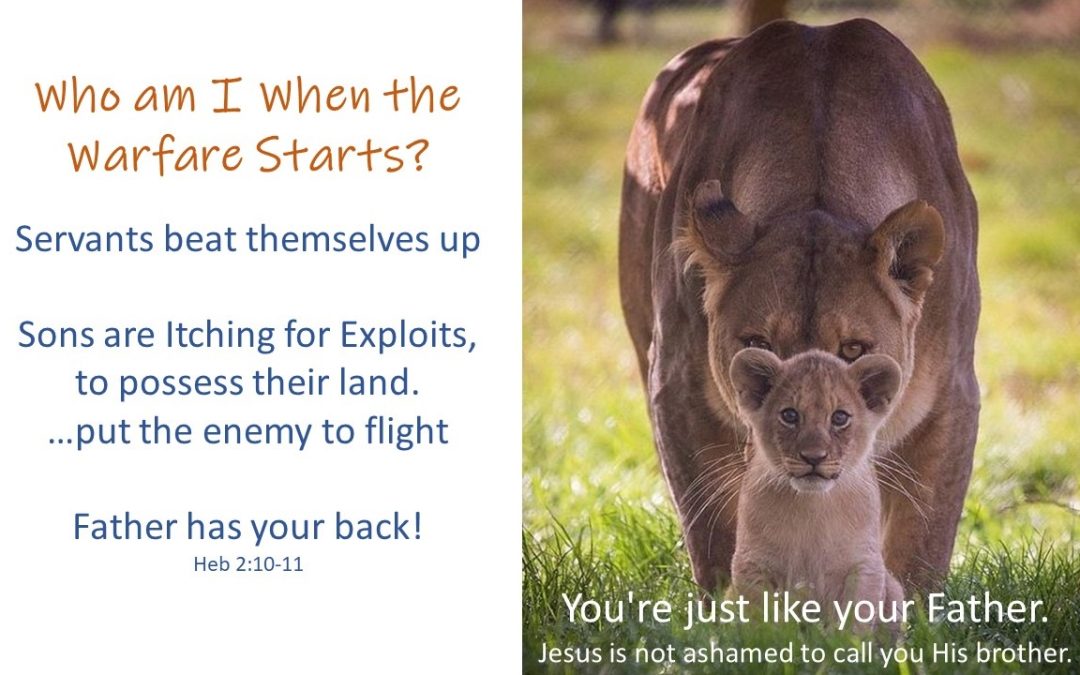 When spiritual warfare starts, servants beat themselves up. Attacks from the enemy result in strained relationships, rejection, loss of finances, health problems, confusion, etc. Servants immediately conclude God is judging them, and they must have opened a door with sin in their life.

Last night I had a dream. There was a tiny sliver in the back of my hand that was hard to see and stuck so tightly I couldn’t pull it out for days. Finally, I got a clear view and pulled it out with some difficulty. When I woke up, I asked the Lord what it meant. I went back to sleep and dreamed again; I concluded I was kicking against the pricks (Acts 26:14). I also dreamed of telling a friend, and before I could explain, he said, “The sliver is kicking against the pricks.”

Finally, I woke up for the morning, and the Lord spoke this, “John, when you get a sliver, you should just take it out and stop making a mountain out of it. Warfare is an encounter with the enemy. A lot can happen, and if you’re going to be a son engaged in warfare, you can’t shoot yourself every time a battle begins. Sons don’t do that. There is no condemnation and no perfect sons at the same time! David was a great warrior and man after my own heart, yet he wasn’t perfect. Neither are you. It’s OK! I’ve got you covered; I’ve got your back; You are always on my team, part of my family. I will never leave you or forsake you, even in warfare.”

Prophetic Whiffs – This morning, I was also sent a link to a prophetic message about the possible demise of the United States. Prophetic people can tap into a spirit of religion and prophecy the devil’s will. It’s a pathetic use of the prophetic that puts people on the wrong team as though it’s God’s judgment and we should welcome defeat! What is written in our book and our nation’s book is totally worth fighting for, and that is exactly the point of warfare, precisely what the devil is contesting. Father loves you, and He has a purpose for your Nation that He also loves.

Sons can see the deception behind the scenes. They are not immune from enemy accusations and freely acknowledge both the charges and their roots. Then they take those accusations to the courts of heaven and the cross of Jesus. Sons are present in the Council to be on the same page with Father.

Ps 84:7 – They go from strength to strength, Every one of them appears before God in Zion. NASU

Sons are both priest and king – Sons understand that righteousness isn’t our stockpile of good works as much as simply being on the same page with their Father, doing what he’s doing. We see Father’s purpose first in the Council as priests and bring it to earth with prophetic authority and 7-mountain power as kings. Sons are the ones volunteering to start the fight. They are excited to be part of the Ezekiel 37 army. The warfare so motivates sons that some enlist first and get saved second. They are simply doing what Father has written in their hearts. It’s not bravado. They are cooperating with their Father and their hearts. Sons have a different spirit.

Num. 13:30 – Then Caleb silenced the people before Moses and said, “We should go up and take possession of the land, for we can certainly do it.” NIV

1 Sam. 17:26 – David asked the men standing near him, “What will be done for the man who kills this Philistine and removes this disgrace from Israel? Who is this uncircumcised Philistine that he should defy the armies of the living God?” NIV

Sanctified bravado – There is a courageous, prophetic confidence that sons have, that servants simply don’t. It’s black and white when you see the contrast in people. We either are on the same prophetic page with our Father, or we’re not. If not, then we are left in our intellect gazing at our navel, useless servants in warfare, authors of the condemnation of friendly fire.

Warfare is real, especially right now. Nations hang in the balance and sons are volunteering for the fight. Corruption and deception are rampant worldwide, and there are real casualties. But the sweet fellowship of being on the same team with Father and other brothers and sisters is the real family, the ecclesia, those sent from the Council of Heaven.

Could anything go wrong? Of course, we are not surprised by it. But Father can resurrect us. We can fight with abandon. It’s quite liberating to have something worth more than my own life to live for, Kingdom. It’s a party in fact! My ministry, reputation, and survival are not the goal. Kingdom is too exciting and too much fun! Prepare your heart for success, victories, and dreams coming true as well. That’s where we’re taking this. His Kingdom on this Earth – Intentional Reformation of Nations. You’re invited! It’s already scripted in your heart!

Rev. 12:11-12 – They overcame him by the blood of the Lamb and by the word of their testimony; they did not love their lives so much as to shrink from death. 12 Therefore rejoice, you heavens and you who dwell in them! NIV

Isa 54:17 – no weapon forged against you will prevail, and you will refute every tongue that accuses you. This is the heritage of the servants of the Lord, and this is their vindication from me,” declares the Lord.  NIV

Resources – The purpose of heaven for each of us is already written in your heart and can be heard in the Council. Your business can shift from a Christian business full of servants to a Kingdom business full of sons who make a difference. We help people and businesses get their prophetic purpose in writing and then make it happen on earth. Taste and see! Tools to get started are here:

1) Retelling your dream as well as including stories really helps us connect emotionally and experientially with what you are saying and gets us involved more earnestly in what you are expressing, helps us “see” and “feel” what you are experiencing.  More please!

2) I suggest going deeper with examples. David in 1 Samuel 17 is a great, well-known example.  We all know what David did with Goliath vs. Israel’s army but why was he different?  In verse 29 of 1 Samuel 17 David asks the question when he is questioned about his why “…Is there not a cause?”  Do we not have a just cause now? As well as from the foundation of the world – reformation of nations?  Why reformation of nations?  They are Jesus’s reward/inheritance. Isn’t this a sufficient reason for us as sons to arise and shine?

3) David had an experience with the Father that caused him to know God as his Father and the Father had a covenant with him and all of Israel as well and He personally experienced the Father honoring His part of the covenant by giving him supernatural strength and power when a bear and lion attempted to kill one of the sheep he was responsible for stewarding. Are we not in this same situation today?  Because of David’s experience with the Father, he told Goliath, the enemy, the uncircumcised Philistine, who was a foreigner on the land due to covenant, that he came to battle him “in the name of the Lord of Hosts”.

4) verse 48, because of his trust in Father, it says “David ran toward the enemy”. Should we not be running at the enemy to defend, contend and steward the land and covenant that God has given to us?

5) Two more examples of people contending as sons because of their experience with the Father and trusted what the Father would do to honor His covenant was 2 Samuel 23:11-12, 1 Chronicles 11:12-14. In both of these additional examples the Israeli army fled the scene and only Shammah and Eleazer stayed and fight as true sons, protecting the land they were given via covenant while the others fled, giving away part of their heart (book, scroll). Key, I believe, in these two examples is the last sentence of both stories is: ” so the Lord brought about a great victory” when these guys contended as true sons against great odds.