From Servant to Son 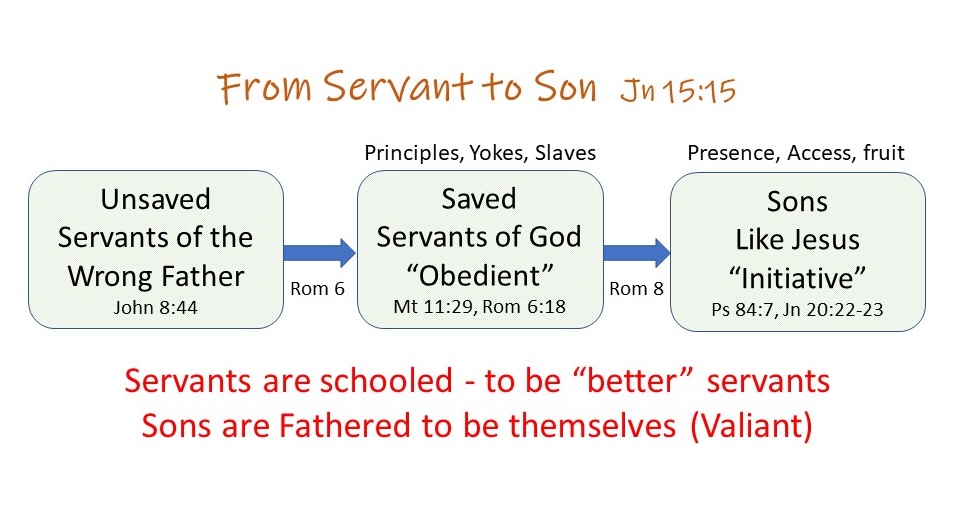 The God we “serve” isn’t really looking for servants. He is not the King of servants; He is the King of kings. Our Father isn’t looking for compliant submission from servants. His heart is longing for collaborative creativity from sons. He treasures two things: 1) sons who are conversant and conversational about His Purpose, and 2) sons who can creatively initiate its implementation on earth. Sons know their Father’s business and do it from the heart, not the letter.

John 15:15-16 – I no longer call you servants, because a servant does not know his master’s business. Instead, I have called you friends, for everything that I learned from my Father I have made known to you.

2 Cor 3:5-6 – Not that we are competent in ourselves to claim anything for ourselves, but our competence comes from God. 6 He has made us competent as ministers of a new covenant- — not of the letter but of the Spirit; for the letter kills, but the Spirit gives life.  NIV

The confusion comes from the reality that we all start as servants. We love God and want to do the right thing, but we don’t trust ourselves. We are under the watchful care of shepherds as we “sheep” learn to hear his voice. The point is that we outgrow being told what to do. The day eventually comes when we hear our Father’s voice and begin to flow with it to inherit our identity and our land.

Gal 4:1-2 – Now I say, as long as the heir is a child, he does not differ at all from a slave although he is owner of everything, 2 but he is under guardians and managers until the date set by the father. NASU

Definitions (obedience) – Even the language of obedience and righteousness is confused. Obedience throughout the bible always carries the first implication of hearing our Father. Sons very naturally respond to the prophetic voice of their Father. Co-laboring is more accurate than obedience. Servants rely on others to hear God for them and offer up a version of compliance to the letter. That form of obedience is never sustainable; the letter eventually kills motivation. It doesn’t connect with our hearts.

Righteousness – We usually think of righteousness as being in good standing with God via our obedience. Dikaiosune (G1343) means equity of character or act. In modern vernacular righteousness is being on the same page of purpose with our Father. Yes, we do what He is doing, but obedience isn’t the bridge to righteousness. It starts with “hearing” the “purpose” in His heart.

Servants and slaves do what they themselves don’t want to do. That’s the definition of religion. Sons connect with what Father has written in their hearts and cooperate with their own will and identity. They are doing what they love from the heart. They have great authority because they know their initiative also resides in their Father’s heart. Sons can ask “whatsoever” (Jn 14:13, 15:7, 15:16, 16:23, 16:26, 1 Jn 3:22, 5:14). They can even forgive “whomsoever” Jn. 20:21-23. Our concepts of obedience and righteousness don’t normally even allow such levels of initiative!

John 20:21-23 – Again Jesus said, “Peace be with you! As the Father has sent me, I am sending you.” 22 And with that he breathed on them and said, “Receive the Holy Spirit. 23 If you forgive anyone his sins, they are forgiven; if you do not forgive them, they are not forgiven.” NIV

Beyond obedience – Sons offer something Father treasures much more than ticking off a list of instructions (compliance) or intellectually knowing all the principles (recipes). Sons know their Father’s heart, and they have experienced the key ingredient of the Kingdom; the Father’s love for His people.

John 15:14-17 – “You are My friends if you do what I command you.  15 “No longer do I call you slaves, for the slave does not know what his master is doing; but I have called you friends, for all things that I have heard from My Father I have made known to you.  16 “You did not choose Me but I chose you, and appointed you that you would go and bear fruit, and that your fruit would remain, so that whatever you ask of the Father in My name He may give to you.  17 “This I command you, that you love one another.  NASU

Do what I command? – “Command” is used twice in the above passage. It’s means to enjoin (as in the sense of invitation from the Father to those who can hear His voice). The Greek word for command comes from Telos which alludes to the vision in Father’s heart that sons can see and share.

The trademark of sons is that they carry their Father’s heart. They don’t operate out of a shopping list of instructions or a recipe book full of principals. They go to the council and see for themselves what Father is doing. They delight in bringing that purpose to earth and doing even greater works. It’s that simple! The living word is abiding in them, and Father’s purpose flows from their bellies like rivers of living water. They are living epistles that bring the written word to life. They live by every word that proceeds from their Father’s heart. It feels much more like freedom than sacrifice. Life in the Kingdom of God is not a discipline that requires accountability; it’s a jailbreak from the letter of the law and the drudgery of servanthood and slavery that sons run toward. Their testimony of Jesus is the spirit of prophecy (Rev. 19:10). Their words are living and powerful and they love to set captives free, just like their Father.

2 Cor 3:17-18 – Now the Lord is the Spirit, and where the Spirit of the Lord is, there is freedom. 18 And we, who with unveiled faces all reflect the Lord’s glory, are being transformed into his likeness with ever-increasing glory, which comes from the Lord, who is the Spirit. NIV

Ps 84:7 – They go from strength to strength, Every one of them appears before God in Zion (Council).  NASU

What About you? – The purpose of heaven for each of us is already written in our hearts and can be heard in the Council. Your business can shift from a Christian business full of servants to a Kingdom business full of sons who make a difference. We help people and businesses get their prophetic purpose in writing and then make it happen on earth. Taste and see!