Now That We’ve All Been Covid Conned, What’s Next?

The future is open – The word prophetic is nearly always associated with predictions of the future and usually in the context of what God will do. The spirit of prophecy is a reflection of the Father’s purpose, not a timeline for a specific event. The theological concept of sovereignty was understood to mean, “God controls everything.” He doesn’t! He has the power to control anything He wants to, but He is in the business of building His kingdom through His Sons – Jesus being the firstborn. Kingdom is an all-volunteer army. Free will and personal initiative in this relational army are the hallmarks of God’s family. Prophetic purpose is the language of the spirit of prophecy. It expresses the heart of the Father. There is always more than one way to fulfill our Father’s purpose. That’s why prophecy that leaves the future no options is nearly always false. He delights in co-laborers who are creative, industrious, and innovative.

The real prophetic question is not, “What is God about to do?” It is what are you and I going to do in cooperation with our Father’s purpose. It is the Father’s purpose to bless nations and awaken His people to another reformation. What Happened?

Pandemic Panhandlers – Well, the enemy presented a clever prediction about a pandemic, and we all believed the lie! It was presented to us by people we trusted (Doctors, the media, etc.). I confess that I believed the lie for a while. Then it unfolded that the models were wrong, and Covid-19 is just another flu strain, that this flu season was no different than the average of the last five (CDC Website). Yet, the whole world believed the lie that cost a recession, untold ripple effects from the economic destruction, and erosion of our freedom of choice. The government cure will easily prove to be worse than the disease.

Matt. 24:24 – For false Christs and false prophets will appear and perform great signs and miracles to deceive even the elect NIV

2 Thess. 2:8-10 –The coming of the lawless one will be in accordance with the work of Satan displayed in all kinds of counterfeit miracles, signs and wonders, and in every sort of evil that deceives those who are perishing.  NIV

What’s next? – Now that we’ve all been “conned,” it’s interesting to see the reaction. Some are awakening to reality; others are choosing the comfort of delusion. This false pandemic is a foretaste of the political and spiritual awakening at our door and the viral nature of the next reformation. This lie was a trial run. A leader of a nation (even God Himself) is not free to present the truth when the media and the people have chosen to embrace the spirit behind the lie and are content to live in a culture of corruption. We have to want our freedom enough to do something about it.

2 Tim. 4:3 – For the time will come when men will not put up with sound doctrine. Instead, to suit their own desires, they will gather around them a great number of teachers to say what their itching ears want to hear NIV

The Unveiling – Our Father is gradually pulling the curtain back on corruption in the media and government institutions in every nation – There is a spirit that empowers the lie; blindness is a symptom. What was hidden is being shouted from the rooftops. The media and political spin will be a dizzying display of truth and deception that is best discerned in light of what the Father is doing. Facts can change minds, but experiences change hearts. The experience of being deceived and coming out from under the spell of a lie, and the liar, is a fantastic wake-up call that requires us to humbly admit our spiritual gullibility. We need Jesus! 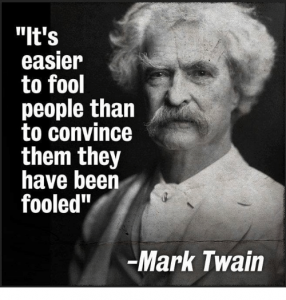 Prepare the way – The Father’s purpose is clearly to pave the way for reformation by exposing corruption in nations, institutions, even our own hearts. The biggest question: not “What is the Father is doing?” but, “What are we going to do?” Will we embrace this awakening or continue in the comfort of our delusion? God isn’t going to steamroll our free will. As individuals and nations, we will reap the fruit of our decision. A free and thoughtful public willing to choose life is the greatest enemy of deception and tyranny.

The bright future – We are probably living in the greatest opportunity in history to establish God’s Kingdom, bless nations, and set captives free. Everyone is expecting “religion” when God’s conspiracy is liberty and justice for all. This reformation won’t be contained in churches alone. It will revolutionize every mountain of our cultures with blessing and favor. Sons are not waiting for a rapture; they are enraptured with bringing heaven to earth, even if it takes some warfare. Father is inviting you to play a role.

As I drafted this blog, President Trump posted a tweet this morning that said it well:

“….And then came a Plague, a great and powerful Plague, and the World was never to be the same again! But America rose from this death and destruction, always remembering its many lost souls, and the lost souls all over the World, and became greater than ever before!”

Want more? We think you will enjoy this blog and the books and online courses that go together. Our latest release gives an overview of God’s strategy for reformation, Intentional Reformation.

2 Peter 2  But there were also false prophets among the people, just as there will be false teachers among you. They will secretly introduce destructive heresies, even denying the sovereign Lord who bought them — bringing swift destruction on themselves. 2 Many will follow their shameful ways and will bring the way of truth into disrepute. 3 In their greed these teachers will exploit you with stories they have made up. Their condemnation has long been hanging over them, and their destruction has not been sleeping.

4 For if God did not spare angels when they sinned, but sent them to hell, putting them into gloomy dungeons to be held for judgment; 5 if he did not spare the ancient world when he brought the flood on its ungodly people, but protected Noah, a preacher of righteousness, and seven others; 6 if he condemned the cities of Sodom and Gomorrah by burning them to ashes, and made them an example of what is going to happen to the ungodly; 7 and if he rescued Lot, a righteous man, who was distressed by the filthy lives of lawless men 8 (for that righteous man, living among them day after day, was tormented in his righteous soul by the lawless deeds he saw and heard)— 9 if this is so, then the Lord knows how to rescue godly men from trials and to hold the unrighteous for the day of judgment, while continuing their punishment.  10 This is especially true of those who follow the corrupt desire of the sinful nature and despise authority.

Bold and arrogant, these men are not afraid to slander celestial beings; 11 yet even angels, although they are stronger and more powerful, do not bring slanderous accusations against such beings in the presence of the Lord. 12 But these men blaspheme in matters they do not understand. They are like brute beasts, creatures of instinct, born only to be caught and destroyed, and like beasts they too will perish.

13 They will be paid back with harm for the harm they have done. Their idea of pleasure is to carouse in broad daylight. They are blots and blemishes, reveling in their pleasures while they feast with you.  14 With eyes full of adultery, they never stop sinning; they seduce the unstable; they are experts in greed — an accursed brood! 15 They have left the straight way and wandered off to follow the way of Balaam son of Beor, who loved the wages of wickedness. 16 But he was rebuked for his wrongdoing by a donkey — a beast without speech — who spoke with a man’s voice and restrained the prophet’s madness.

17 These men are springs without water and mists driven by a storm. Blackest darkness is reserved for them. 18 For they mouth empty, boastful words and, by appealing to the lustful desires of sinful human nature, they entice people who are just escaping from those who live in error. 19 They promise them freedom, while they themselves are slaves of depravity — for a man is a slave to whatever has mastered him. 20 If they have escaped the corruption of the world by knowing our Lord and Savior Jesus Christ and are again entangled in it and overcome, they are worse off at the end than they were at the beginning. 21 It would have been better for them not to have known the way of righteousness, than to have known it and then to turn their backs on the sacred command that was passed on to them. 22 Of them the proverbs are true: “A dog returns to its vomit,” and, “A sow that is washed goes back to her wallowing in the mud.” NIV