You Can Be a Seer 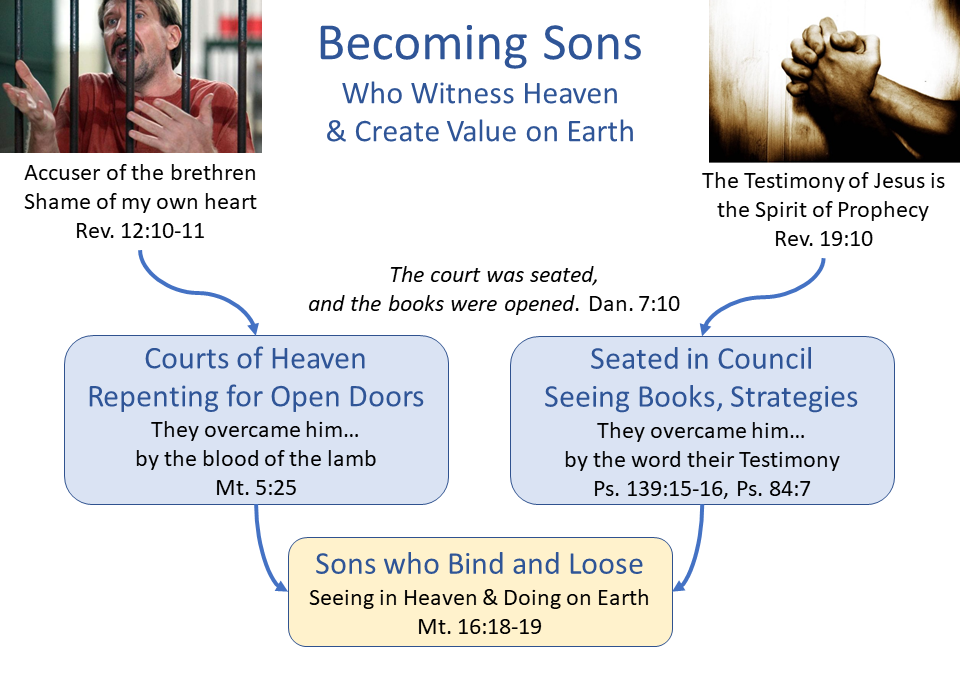 We used to think gifts of the Spirit weren’t for anybody. Then we decided they were for a few. Now we know they are for anyone who has faith and maturity to operate in them. Becoming a seer is the same. It’s for everyone. First the why, then the how.

Why see? – Seeing is the natural language of the heart. Showing me is always more powerful than telling me. If you share a concept or a prophetic insight with someone in words they can understand with their intellect, but that’s not the goal. If our goal is impacting someone at a heart level, then we need to speak the language of the heart – pictures, and scenes that bring up experiences.
Revelation 19:10 says the testimony of Jesus is the Spirit of prophecy. Testimony (maturia) refers to evidence given in a judicial sense. It’s often translated “witnesss,” and it’s a root word of martyr. You have to be there and see it yourself to me a witness!

Rev. 12:11 – They overcame him by the blood of the Lamb and by the word of their testimony; they did not love their lives so much as to shrink from death. NIV

When we can see the evidence of our book or calling or assignment from heaven, we see the purpose of doing it. When you “see” your ”purpose” it’s easy to put it first; purpose is both something to live for and something to die for.
We have much more authority to bind and loose on earth when we can see those same issues played out in heaven and we know how things are supposed to go. We are seeing what the Father is doing in heaven, and we are simply doing the same things on earth.
Jesus did what he saw the Father doing. We usually take that to mean a specific and immediate instruction. That can be true, but I see most people coming back from the courts and council with a sense of purpose more than a shopping list. We have authority as sons to carry out the Father’s purpose. The future and the specifics are normally a bit open.

How (My story) – Terry Tyson introduced me to Beverley Watkins who introduced me to the courts of heaven when I was in a season of personal desperation. I didn’t like the judicial sound of courts, but Beverley was personable, humble, and disarming. She also operated out of a strong seer gifting. We never had a shopping list of things to check off – it was always the holy spirit showing us accusations and where they originated generationally. After that first session, I ran into friends from my network that I thought would benefit from prayer. Over two years, I arranged about 20 three-way skype calls with Beverley and someone from my circle who was stuck like I was. About session 3 or 4 Beverley began asking me what I saw. My response was, “Nothing, that’s why you’re here.” But after 10 or 15 calls I began to pick up on the spirit of becoming a seer and offered my feeble contributions. Those contributions got better; the more we prayed. Around #20 Beverley got too busy, and I had to help people myself. That worked out much better than I expected. Now we have an online course at www.Seers-and-Doers.com, and we intentionally train people to use their seer gifting in the courts and council (it’s more the experience of going than an informational course). The Zoom calls work and most of our tribe can take others to the courts and council themselves.

Getting started – Remember when you first began to use your prophetic gift. We take thoughts that come to mind and discern what’s junk, what’s irrelevant, and what’s from the spirit of God. We take what’s from the Lord, discard the rest and put it in words that bless other people. People skilled and anointed in the prophetic can discern and articulate those thoughts so quickly it flows very naturally.
A seer gift operates the same way. We take what’s from the Lord and put it in scenes that bless other people. Sometimes it’s a single picture; other times, it’s like a movie with scripts, characters, and scenery. Those scenes often have meaning for us, but there are also times when we’re just sharing what we see, and the profound meaning is understood by the receiver.
A seer gifting is often more impactful than the prophetic because it speaks the language of our hearts. People are deeply touched by it (1 Cor 14:25).
Sons see things in the courts and council so they can bring them to earth, e.g., Num. 11:27-29; Rom. 8:14. That’s our job. We’re seeing in heaven and doing on earth. It’s fun and you’re invited. It’s not just limited to spiritual stuff. Father is interested in blessing all 7 mountains, so it’s hugely impactful for creating new ideas and bringing greater value to our mountain in practical ways that have financial ramifications.
What will we see? – In a word, Jesus, His purpose, your role, and His power

Eph 1:17-23 – that the God of our Lord Jesus Christ, the Father of glory, may give to you a spirit of wisdom and of revelation in the knowledge of Him. I pray that the eyes of your heart may be enlightened, so that

• you will know what is the hope of His calling,
• what are the riches of the glory of His inheritance in the saints
• what is the surpassing greatness of His power toward us who believe.
• the working of the strength of His might
• seated Him at His right hand in the heavenly places,
• far above all rule and authority and power and dominion
• He put all things in subjection under His feet, and gave Him as head over all things to the church, 23 which is His body, the fullness of Him who fills all in all. NASU