This video is here.

Politics in any nation cannot be understood or debated without an awareness of the plan that God has for that particular people and nation. Patriotism is an appreciation for that national destiny. It’s true that patriotism without God becomes mindless nationalism that is fueled by superiority and disdain for others. However, retreating into globalism sets the stage for some form of totalitarian state. It is simply nationalism on a global scale of one-world government… and, to be honest, it is one strategy behind the kingdom of darkness.

Both people and nations are uniquely gifted and called with vastly differently resources, gifts and talents. To devalue those differences misses the genius of God’s Kingdom and His desire to bless nations (Gen 12:2-3). Our identity as an individual and a nation has roots in our Father choosing us, and that calling defines our role in the Kingdom and our avenue to creativity.

But the plans of the Lord stand firm forever, the purposes of his heart through all generations. 12 Blessed is the nation whose God is the Lord, the people he chose for his inheritance. Ps 33:11-12

For the nation or kingdom that will not serve you will perish; it will be utterly ruined. Isa 60:12

Righteousness exalts a nation, but sin is a disgrace to any people. Prov 14:34 NIV 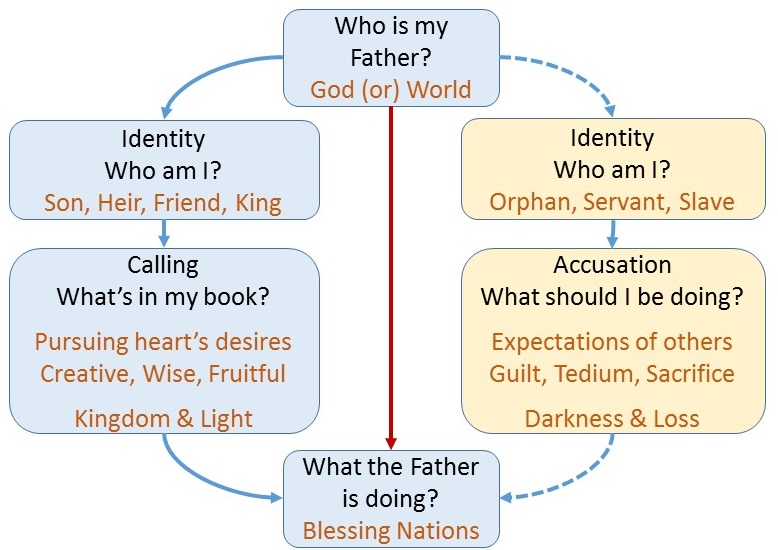 Cooperating with God – The genius of entering the Kingdom is that we are simply allowing Jesus to focus our calling, cooperating with it and following it to a place of abundance. With people, we use the heart plan and our prophetic sense to tap into the desires that God wrote in their heart. Then, we simply try to confirm, expand and cooperate with that direction. We never impose some “one-size-fits-all” direction on God’s people. They are too unique, too called and too precious in their Father’s sight to melt into one nameless pot.

In the very same way, we encourage nations to preserve their Godly heritage and to cooperate with their national calling. We don’t impose it on them. We listen to God’s Spirit and get a sense of what it is, so we can flow with it. For example, in Poland we wrote out a heart plan for the nation by simply asking the Lord to show it to us and by asking Polish people to confirm it and expand it (you can do the same for your nation). When we speak of that calling on a nation, it has a very powerful prophetic pull on hearts. It touches a special sense of being chosen by God and it inspires a humble sense of wanting to cooperate with our Kingdom purpose. We were created to feel proud of that collaboration with our Father and to hear Him say, “Well done!”

I’m not personally the recipient of all wisdom regarding the calling on nations, but I am a student of those heritages and destinies in the nations we visit so that we can build a strategic bridge between those nations and God’s Kingdom. We are not just helping people enter this reformation; nations are invited, too. Poland has been a focus that the Lord has given us, so we have linked examples of her book and what we saw in the courts.

Ask of me, and I will make the nations your inheritance, the ends of the earth your possession. Ps 2:8 NIV

USA – is called to be the light and the glory. An example of God’s grace and prosperity granted to bless and minister to other nations. She is called to lead. Her trademark verse is, “Where the Spirit of the Lord is there is liberty.” The genius of the United States is found in the power and uniqueness of her states… each is valued as a unique cultural expression that contributes to the whole (one of the great principles of Kingdom). There is more about unique American Values here.

Poland – Polin means “a place where God dwells.” It is a place of holiness, heroism, purity and excellence that is easily seen in her people, her history and her destiny. Her heritage is the heart of God and the spirit of resurrection. We asked for the details on Poland’s book and how to intercede in the courts.

Netherlands – is the gateway to Europe. This nation is very entrepreneurial and plays a role in trade… importing and exporting both commerce and the Kingdom. The Dutch can take any idea or invention, recast it into an improved version, and distribute it around the world. This part of Europe was the heart of the first reformation and is called to play another role in the second.

France – France (land of Franks) means free. It is the birthplace of the renaissance, a place of rebirth for creativity, the arts and romance.