There is something brand new in the air. New ideas, new agendas and new initiatives are being released that are blessing people and cultures around the world. I really believe it’s in the context of a Kingdom reformation that will bless people and nations. This reformation includes another renaissance in science, education, the arts, economies, and our cultures. Kings are leading this move and prophetic creativity plays a huge role in unveiling the excellence, competence and glory of God. There is a clear connection between creativity in our mountain and worship with our Father. We were designed for it!

Most of us don’t think of ourselves as particularly prophetic or creative. I want to suggest that tapping into what God is saying prophetically is, 1) a life skill for all of us and, 2) the root of creativity. If we are receptive, creative ideas drop in on us like flashes of light. It’s our responsibility to nurture that idea until it grows up and becomes something we can articulate in words and then implement in actions. The initial revelation is normally incomplete (we know in part and prophecy in part). Co-laboring with Jesus is collaborating on the idea all the way through implementation. I don’t personally believe God requires that ideas originate with Him. I think He’s delighted when His kids are creative like He is.

Being creative implies adopting a lifestyle of “risk.” We must be comfortable being vulnerable while entertaining new ideas and responsible while fleshing them out. That won’t happen unless your theology allows some mistakes… perfection is the time-honored enemy of creativity. Starting the prophetic / creative process is about as messy as your first driving lesson! Getting comfortable with it is like flying a fighter jet – it’s fun! 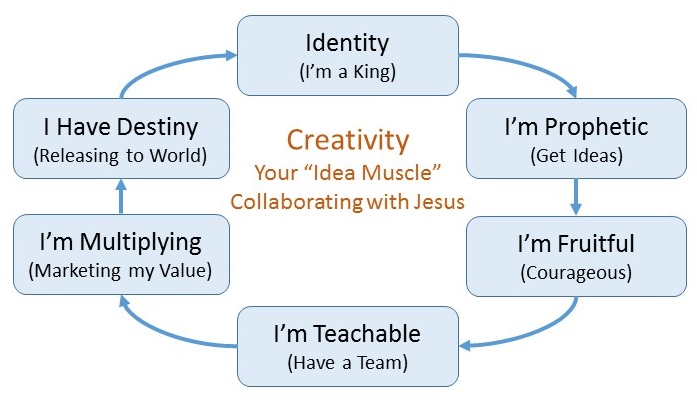 There are five levels of risk we navigate in the creative process:

Creativity is a lifestyle of worship and warfare and love that blesses people and nations. You’re invited! It’s already written in your heart and it will be your biggest thrill to do what the Father is doing. You will never want to retire from being creative. If you enjoyed this topic, you will also enjoy Exercising Your Idea Muscle and this video by Dan MacCollam (60 min).