The theatrics of presidential politics is always highly entertaining. This year the spirit behind the candidates is particularly revealing in the level of emotion that it sparks in the debate. Both sides are talking way more than listening, and have little desire to meet in the middle.

There is a certain peace from the storm in an awareness of the times and seasons. God is both male and female, left and right. Marriage was designed to balance us in the whole nature of who God really is. Our encounter with Him is nurturing and merciful, on one hand, and just and wise on the other; He is both. There is a prophetic middle ground in solutions that acknowledge the value of the differences. Like parenting children, cultures need both mom and dad. When it’s all a nurturing, motherly spirit, the kids can be chaotic and lawless. If it’s all fathering, it can be wise and truthful, but cold and callous, and the kids feel the conformity and control. Children, and cultures, run to excesses if they don’t have a balance. Those excesses in politics both lead to the same place… tyranny and poverty.

If there is a Godly balance between masculine and feminine attributes in a family or a culture, the result is real maturity: liberty, creativity and prosperity. 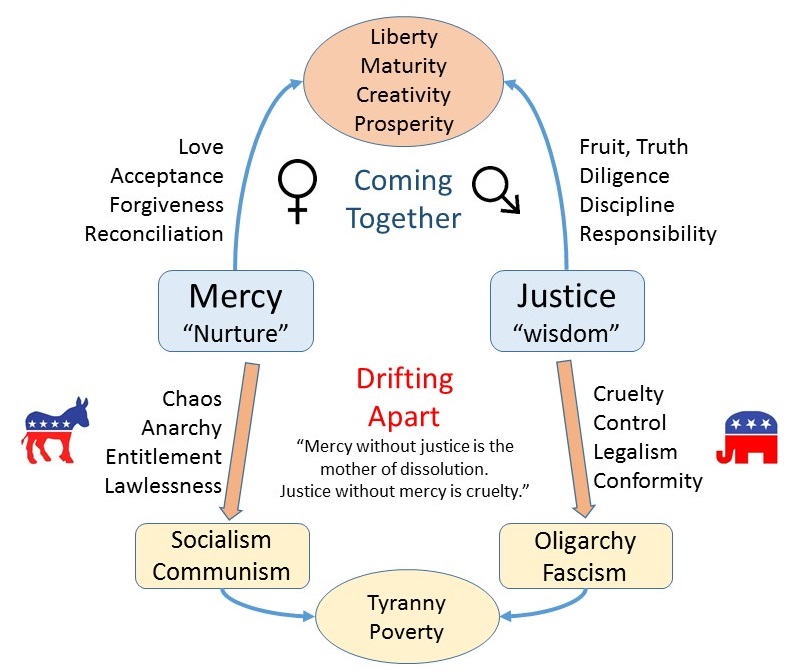 In western cultures over the last 200 years, the pendulum has swung from a world ruled by masculine authority figures to a much more feminine politic. Revolutions in the US and France, for example, were staged to overthrow oligarchies and kingly rule in favor of a more caring style of government. The heavy handed rule of a masculine dictator or an authoritarian husband is easy to spot. Putin is perceived to be masculine and controlling. Obama is perceived as feminine and caring. Both represent imbalance and are trending toward the same place!

Modern western governments are centralized in large bureaucracies (in the US and EU), but much more distributed among an ideological elite compared to an oligarchy. Its trademarks are equally controlling via political correctness and a biased press. Feel-good themes are leveraged to increase the size and influence of government. Some examples are 1) global warming to protect “mother earth,” 2) borderless multiculturalism to dismantle existing cultures and values that are thought thought to be narrow and oppressive, and 3) social welfare, advertised to help the needy, but has destroyed the inner city family structure and institutionalized poverty in the “hood”). Patriotism is viewed as masculine populism and is portrayed as dangerous, along with the God-given destiny on the nation. All these modern trends form a theme that is underwritten by a spirit.

The feminine version of dictatorial control (in men and women) is fed from a Jezebel spirit: lawless, corrupt, intimidating, deceptive, immoral, self-righteous and anti-Jesus (anti-Christ). The value system in a Jezebel culture is whatever achieves the desired end – there are no rules or limits. Let’s take a look at how God dealt with Jezebel originally.

Dealing with Jezebel – Elijah anointed Jehu as King of Israel, and Jezebel became his assignment. Notice when Jehu comes after her that she fixes herself up to look good (temptation) and calls him Zimri. Why? Zimri was an official who overthrew and killed his king, Asa, and was overwhelmed by his enemies, committing suicide seven days later (1 Kgs 16). Jezebel, as the deceased king Ahab’s wife, is making one last accusation trying to intimidate Jehu. Jehu doesn’t take the bait. He doesn’t taunt her back…. nothing theatrical. He just does his job… in the name of Jesus.

The Jezebel influence in a culture emasculates men, and celebrates passivity in the name of peace, moral compromise in the name of freedom, and perversity in the name of tolerance. Eunuchs are people locked into serving the bureaucracy. Eunuchs have no future of their own and no ability to multiply. Notice that Jehu appeals to the those fully emasculated ones in Jezebel’s tower, “Who is with me?” With this prophetic call these eunuchs “grow a pair” and throw down the intimidation and control of Jezebel. It took a man of war calling to them to arise into their masculinity. History has celebrated masculine deliverers like David, Jehu, Churchill, MacArthur, Patton, and Thatcher (there are many women). They called out the courage wired into Godly men and women and led them to great victories. Jezebel must be overcome in every generation. That’s the nature of the current political season. This spirit manifests in both men and women, and the courage to break its power over cultures is available to both men and women.

Why is this season contentious? It’s about much more than the issues. Some of the antagonism is at a spiritual level. Others are fighting the soulish issues of their own inner healing from father or authority failures. In the middle of this storm, God is sounding a trumpet for the courageous to arise, and throw out Jezebel, and be free from her threats, intimidation and deception. He is shining bright lights on the hidden culture of corruption. It is the season of revival and the season where a judge or a Cyrus is raised up as a deliverer. It is exactly the time to avoid the theater and deception of the media circus. At this moment in time, much of the press is simply Jezebel’s propaganda wing. We will keep our eyes on God and our ears attuned to His voice. He is going to vote. We are going to change a culture, with people who can see a bright future.