Identity – Who am I?

Jesus is not just the master of servants, or the Father of sons, or the first born of many brothers. He is also the Lord of lords and King of kings. We all go through a transition from being comfortable as a faithful son who obeys the Holy Spirit. Anything more starts to make us feel nervous. We all want to be cautious with presumption and we want to honor God, be comfortable in our true identity and possess our land of promise. The Kingdom is built on a relationship with God that releases personal initiative birthed in the desires that God wrote in our hearts. It’s time for sons to grow up… scary as that may be.

Identity – The path of spiritual maturity takes us from servants to sons and brother and then to kings. “Who am I?” is very much a product of who I believe God is. Our religious tradition has roots in the Old Testament. People needed prophets, priests and kings to hear God for them under the old covenant. There was atonement for sin, but Jesus did not dwell in their hearts and the Holy Spirit was not released. People were prone to be hard-hearted and rebellious. Old covenant leaders were very directive and the best model of discipleship was “servant.” 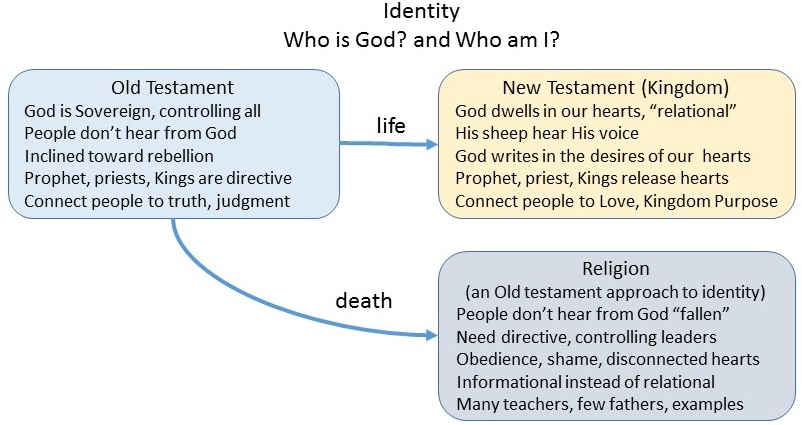 When Jesus (God with us) arrived on the scene, He invited us to transition from servant to friend (Jn 15:15). The way God relates to people now is very different. He’s put the desires of His own heart in our hearts, and He longs for a relationship of initiative where we chose to be part of the Kingdom by choosing the desires in our hearts that match his. Religion is often still a bastion of seeing God as controlling and directive instead of relational. Religious leaders emulate their concept of God by being authoritative and directive. Religion is an invitation to be something you’re not. Christianity, at its core, is an invitation to be who God created you to be… to be yourself.

Who am I – before I became a pastor, I assumed every religious tendency in the church could be attributed to poor leadership – and I intended to do much better. What surprised me during my 13-year stint starting two churches was that many people carry a servant identity and they want directive leaders. It is slowly changing as the Kingdom grows and more and more people are willing to trust their hearts and contend for their Mountain. Our real calling is to bless nations and change the world by having a loving and proactive involvement in every mountain of our culture (education, government, the arts and entertainment, business and family)… not just religion!

Your role – We have the privilege of using our prophetic and leadership gifts to help people connect with their Kingdom calling. Those gifts operate out of an amazing love for people. Let’s contrast the old with the new so we can see the difference between religion and Kingdom.

Religious prophetic – discerns sin and the consequences and highlights the negative in terms of rebuke, judgment, accountability and discipline. This gift can always spotlight the negative… and is consumed by it. Every delay or miss is presumed to be a failure in obeying God. Suffering is always self-inflicted. People submit to shame, manipulation and control under this ministry because they don’t understand their identity – they think they are still servants.

Kingdom prophetic – can discern all the negative but chooses to dig deeper and find what God wrote in the person’s heart and connect it to Kingdom purpose. People feel loved back to life by this ministry, and choose their own election voluntarily. They become sons, friends, and kings.

Religious Leadership – Religious leaders emphasize God’s control and inherent sinful nature of man. They are directive and authoritarian because they sincerely believe that sacrifice and obedience is what God wants. They are naturally teachers, prophets or apostles who are informational but not relational. They produce compliant servants… who eventually rebel.

Kingdom Leadership – Kingdom leaders realize people are created in God’s image and carry His Spirit and His heart for the Kingdom… “His sheep hear His voice.” They simply connect people with the Father’s voice, that they can already hear, and the desires He’s already written in their hearts (confirmation vs direction). Kingdom leaders train in the way people should go to reach their own destiny instead of funneling them into an institutional program that represents the leader’s vision. These leaders love people, and their goal is to release them into the fullness of what God wrote in their heart. People feel loved, encouraged, empowered and released. Ironically, great movements are spawned in this atmosphere of liberty.

Jesus came to redeem His people, not to judge them. At every turn when we find lost or broken people, it is the nature of God and Godly prophetic people to redeem us from reaping what we have sown. Jesus’ ability to resurrect us from our past and breathe life into the desires of our hearts is an amazing experience in His love and in His presence… that’s the real role of prophetic ministry.

“For God did not send the Son into the world to judge the world, but that the world might be saved through Him. John 3:17 NASU

Practical application – When I encourage people prophetically, I’m not really trying to predict their future and I’m not even trying to guess their mountain correctly. I’m just trying to ask them to articulate the desire of their heart and to help them see if it resonates with their Father’s heart. If they (or I) can say it out loud, we can both hear if it’s real. If it is real, we put the candles on the cake and start the party. If it’s “off” in some way, we try again until we both hear the Father… then we start the party. The Holy Spirit adds all kinds of confirmations and amazing insights to this approach of love and respect. We are pulling them into their own unique identity which is very powerful and exciting.

btw – I read Translating God by Shown Boltz over the holidays – great perspective on the prophetic and part of the inspiration for this blog.