This adventure of releasing our own hearts in the Kingdom and inviting others to do the same has led to some surprising places. For example, I’m blessed beyond measure to find that God has written in the hearts of people who do not yet know Jesus. The ramification is that helping them touch the desires of their heart, helps them experience the person of Jesus. It’s a totally amazing dynamic of the Gospel of the Kingdom. We stumbled into this experience with evangelism of the heart and have declared a party since.

As I’ve given myself permission to function in the mountain of my calling, my eyes have opened to how God is moving in every mountain. So we see the miracles and the warfare in each. The concept of knowing the hearts of another person has two sides. For most, we can easily see the theme of God’s handwriting on the script of their destiny via the desires of their heart. That awareness of a kingdom calling is a natural basis for loving, respecting, and helping people make their dream come true. The flip side is that we also see the influence of evil in hearts and the power of deception. We can see false ideologies and the spiritual dynamics behind them… powers and principalities.

The “new” is that we are giving ourselves permission to undertake great Kingdom initiatives that bless nations and, at the same time, encountering the deceitful powers of darkness reacting to “Jesus in us.” Like Nehemiah, we are building the walls with weapons at the ready.

Jesus was the essence of love, compassion and mercy who forgave Mary, healed the beggar and raised Lazarus from the dead. He was also the Lion who confronted the hypocrisy of the Pharisees, called them blind guides, and referred to their father as the devil. In short, Jesus loved and welcomed God’s people, yet resisted evil. Those who embraced the light felt his love, while those who embraced evil felt His truth. I feel trained and comfortable with love, acceptance and healing, yet very untrained in resisting and confronting evil… expressed through ideologies, spiritual powers and people.

I’m comfortable with bold initiatives while ministering love and welcoming people into the Kingdom, yet I am prone to be a pacifist in resisting vain philosophies, false doctrines, and people led by false spirits. Once we touch relatively secular cultural mountains (education, politics, business, arts, entertainment, and media) we immediately run into all kinds of compromise and pretense. Hearts are not only hidden, but held captive by the other camp, and actively opposing you, your message, and your dream – they have already declared war, whether we have or not! Pacifism and retreat don’t represent the Lion of Judah.

It’s particularly noteworthy that the news media right now is a bastion of oppression. It’s like watching professional wrestling where intellectuals shout over one another, belittling the opposition in tirades of talking points. It leaves our heart defiled and doubtful that the Kingdom can come. They are prone to cover everything the devil is doing while ignoring everything God is doing. I’ve noticed that it takes me out of my heart and into a level of mental cynicism.

Cynicism – Cynicism has become embedded in our culture and is even held up as wisdom. But there is nothing wise, or even likeable, about cynicism. It is a cleverly disguised expression of passivity and hopelessness. How many times do I tell myself that it’s just not worth the effort, that I’m an idiot to even try and make a change? Or that the person with a dream for improving things, whom I just met, will probably fail? Daily. And then I have to have a stern word with myself because I’ve come to understand that cynicism is the ultimate enemy of getting anything done. It is the ultimate enemy of a better future where dreams come true.

Cynical resignation is morphine for the wounds of unrealized hope. If we convince ourselves that little can change, we don’t have to risk acting on our dreams. We resign from the fight… which is exactly the intent of the spirit behind the media. The equivalent expression of the heart is cowardice. 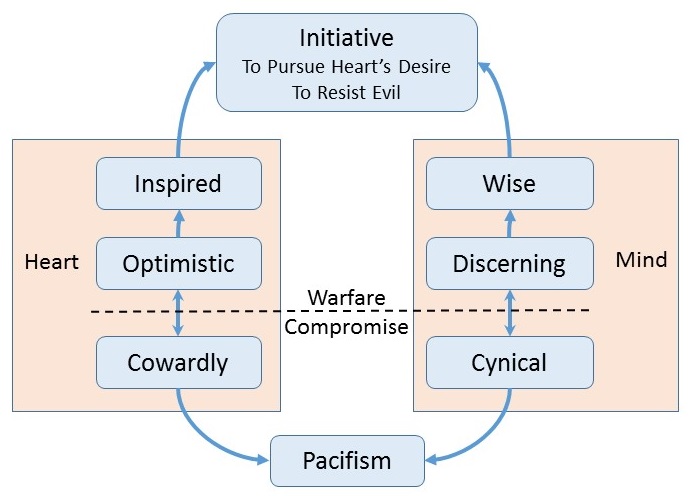 Their words – I want to suggest that God is raising up some Kingdom people who are not passive and are willing to join the fight to defeat enemy tactics. They have several characteristics, but the first is that they will not tolerate a lie or a liar. They can speak truth with love. It feels like a velvet-covered brick in terms of its clarity, authority, and anointing. Lies cannot stand in the presence of these vessels. Their yes means yes and their no means no. These folks are not mean-spirited or demeaning toward other people, but they are rock solid in terms of shining a light on darkness. Their words have impact because they connect truths that other hearts are feeling but have been afraid to articulate. The first lie being promulgated right now is that there is no evil, no devil, no demons, no hell and no judgement now or in the future… no justice. Godly values are no better or worse than cultic values.

These men began to argue with Stephen, 10 but they could not stand up against his wisdom or the Spirit by whom he spoke. Acts 6:9-10 NIV

Thus the people were divided because of Jesus. 44 Some wanted to seize him, but no one laid a hand on him. 45 Finally the temple guards went back to the chief priests and Pharisees, who asked them, “Why didn’t you bring him in?” 46 “No one ever spoke the way this man does,” the guards declared. John 7:43-46 NIV

For I will give you words and wisdom that none of your adversaries will be able to resist or contradict. Luke 21:15 NIV

The weapons we fight with are not the weapons of the world. On the contrary, they have divine power to demolish strongholds. 5 We demolish arguments and every pretension that sets itself up against the knowledge of God, and we take captive every thought to make it obedient to Christ. 6 And we will be ready to punish every act of disobedience, once your obedience is complete. 2 Cor 10:4-6 NIV

Their actions – God is raising up people who will turn the other cheek to offense, but not to evil. They have turned the corner from gullible to discerning, and they are no longer foolish virgins. They expect a fight. They will debate, vote, work, and go to war if necessary to defend the defenseless. They will not tolerate tyranny, terrorism, injustice, deception or abuse. They are not passive. They understand that the enemies have already declared war and will not go away if we ignore them. Enemies must be defeated both spiritually and physically to be stopped. These people see God’s Kingdom value on their nation and they are not ashamed to be spiritual and patriotic at the same time.

Context – The warfare is the lesser part of the whole. The largest truth of the Kingdom is that dreams come true and, in the end, we will fill the earth with His glory. Our optimism and inspiration are rooted in the tangible activity of the Holy Spirit to bless nations, release hearts, and lift up the name of Jesus. Though the warfare is a real aspect of Kingdom that we must navigate, it is really training for a much larger party that has already begun. We can hear the music now, and the celebration of victory has already begun. Jesus’ Kingdom has come. The greatest and most credible conspiracy theory is what the Father has in mind for his people and the nations (Gen 12:2-3).

After they had preached the gospel to that city and had made many disciples, they returned to Lystra and to Iconium and to Antioch, 22 strengthening the souls of the disciples, encouraging them to continue in the faith, and saying, “Through many tribulations we must enter the kingdom of God.” Acts 14:21-23 NASU

Note – Like many other mountains, there is a Cyrus effect in the media. God is using unbelievers to articulate Kingdom values in plain English, while we as believers are maturing. Here’s an example of what it sounds like from Eric Allen Bell and Bill Maher on the topic of terrorism. Both are pre-saved liberals… being used by God! They both carry a certain authority, even to the point of being prophetic in tone. There are articulating something that is on the heart of God that resonates with many other hearts – discern for yourself. God’s people are well able to distinguish their Father’s voice from a lie. Marco Rubio also has this sound.