I Am Both King and Priest

We just got back from two weeks in the Netherlands with Beverley Watkins and a quick visit to Warsaw to catch up friends. Marcel van den Berg helped us pack that time with conferences, small groups and individual appointments. It was way more exhilarating than exhausting and we really had a lot of fun. The Lord always clarifies things for me on trips like this; I get ministered to more than anyone else. This was the roadmap for the trip. Here is what I experienced:

Young Lions – There is a spirit of prayer over the Netherlands and we swam in it. This nation is called to be a gateway to Europe and we found dozens of young lions who got the vision for the next reformation. We opened the Netherland’s book and contended for it. God has already positioned them in places of influence. We left a network of relationships that will be self-sustaining and I believe they have the horsepower to intentionally take steps toward the next reformation.

Beverley – I had lots of time with Beverley Watkins ministering together in the courts of heaven, teaching and in rich fellowship. It was really fun! This trip was an experiment to see if we could marry the concept of Releasing Kings and strategic prayer in the courts. We saw it work at both the individual level and the national level and it all distills down to this simple point. We are being invited to be both priests and kings to accomplish what God has set before us. Let’s define these two aspects of “one” personality:

Kingly – are people in touch with their hearts and pursuing personal destiny in their mountain. They carry Identity, initiative, boldness, wealth creation and the heart of the Father. Some of these “kings” are pre-saved, yet God has already positioned them in influence and calling.

Priestly –  can hear God daily and are naturally prophetic and seers… they can see in the spirit! When they encounter obstacles, they can navigate the courts of heaven to see the root and deal with it. They have access to their book via Jesus and they can hear the accusations of the enemy and they know how to respond to both to set the atmosphere of Kingdom.

We are no longer adding intercessors to business as a separate person or function. Business men and women are being invited into their own spirituality. In the same way, those strong in revelatory gifting’s and traditional church ministries are being invited into the culture and into wealth creation. Traditional revival around meetings will come and will still be fun and powerful and full of God’s presence “and” there will be an anointing to carry it into our mountain and bless nations. The real goal isn’t revival, it’s reformation. We are discipling nations and we started by opening the Dutch Book and finding the network who will carry it.

God is answering the deepest cry in each of our own hearts, “What’s my role? Please send me too!” You and I are being invited to Kingdom – co-laboring with our Father to implement a reformation that will bless nations. We are both priest and king, just like Jesus.

Intercession – Having been raised on a ranch and worked as an engineer I naturally gravitate toward the Kingly side of my calling and personality. I am president of Beverley’s fan club because of an experience in the courts of heaven for me personally and for the dozens we (and now I) have ministered too. Opening our book (Ps 139:15-16) and inheriting our land is why we’re here. It’s a thrill to grasp being chosen and to work with our Father. The courts of heaven are a foundational tool for navigating the obstacles, pulling the curtain back on the roots and silencing the accuser. I’m all in! Now, we’re releasing Kings who understand wealth creation, cashflow, mountains, reformation, and how to operate in the courts of heaven to open books, answer accusations and release the decrees of the Kingdom. We really did find a natural bridge between Releasing Kings and the Courts of Heaven and I found life-long friend. 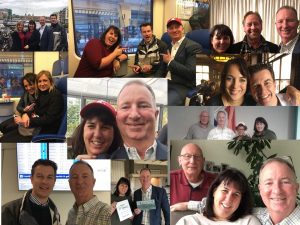