The Spirit Behind Intimidation

One of my experiences in doing great exploits in confidence, feeling the sense of God’s presence, and being so excited, grateful, zealous… is that if something goes wrong, the air suddenly goes out of the balloon and intimidation of the atmosphere or the fear of men takes center stage. Being bold enough to say “yes” to our mountain has an unexpected implication. We become much larger targets for spiritual warfare. For the first time the accusations of giants are pointed directly at us!

Then the Philistine said, “This day I defy the ranks of Israel! Give me a man and let us fight each other.” 11 On hearing the Philistine’s words, Saul and all the Israelites were dismayed and terrified. 1 Sam 17:10-11 NIV

Notice David’s response. He turns the threat right back and offers to cut off Goliath’s head and feed him to the birds… but everything he says is couched in the that fact that the battle is the Lord’s, and that it’s in God’s purposes and for God’s purposes. His response is coming from his position in Christ.

David said to the Philistine, “You come against me with sword and spear and javelin, but I come against you in the name of the Lord Almighty, the God of the armies of Israel, whom you have defied. 46 This day the Lord will hand you over to me, and I’ll strike you down and cut off your head. Today I will give the carcasses of the Philistine army to the birds of the air and the beasts of the earth, and the whole world will know that there is a God in Israel. 47 All those gathered here will know that it is not by sword or spear that the Lord saves; for the battle is the Lord’s, and he will give all of you into our hands.” 1 Sam 17:45-47 NIV

We see the same principle in other passages.

He said: “Listen, King Jehoshaphat and all who live in Judah and Jerusalem! This is what the Lord says to you: ‘Do not be afraid or discouraged because of this vast army. For the battle is not yours, but God’s.  2 Chron 20:15-16 NIV

All those gathered here will know that it is not by sword or spear that the Lord saves; for the battle is the Lord’s, and he will give all of you into our hands.” 1 Sam 17:47 NIV

Elijah had a great victory over Ahab and Jezebel. He prophesied drought, challenged the prophets of Baal to demonstrate God, saw God consume his sacrifice, had 850 false prophets killed, prayed for rain, and outran a chariot to Jezreel. Notice the spirit of intimidation through Jezebel and His response.

Now Ahab told Jezebel everything Elijah had done and how he had killed all the prophets with the sword. 2 So Jezebel sent a messenger to Elijah to say, “May the gods deal with me, be it ever so severely, if by this time tomorrow I do not make your life like that of one of them.”  3 Elijah was afraid and ran for his life. 1 Kings 19:1-3

Why did he run? – It seems clear that Jezebel should have been part of Elijah’s assignment as well. When fear overtook him and he ran, God went after him, found him, fed him, and twice asked him, “Why are you here?” Elijah didn’t go back, and God replaced him with Elisha. His response to the spirit of intimidation cost him his ministry. The intimidation brought such a feeling of fear and defeat that he ran and hid and eventually gave up his mantle or gift, even though God pursued him.

Then a voice said to him, “What are you doing here, Elijah?” 14 He replied, “I have been very zealous for the Lord God Almighty. The Israelites have rejected your covenant, broken down your altars, and put your prophets to death with the sword. I am the only one left, and now they are trying to kill me too.”

Opening the door to Jezebel – We can expect the spirit of Jezebel to sound her accusations. The question is, “What made this one stick to Elijah and why did it cost him his ministry?” Here’s the key.

At noon Elijah began to taunt them. “Shout louder!” he said. “Surely he is a god! Perhaps he is deep in thought, or busy, or traveling. Maybe he is sleeping and must be awakened.” 1 Kings 18:27 NIV

Elijah is taunting the enemy on his own. It doesn’t sound like David and it didn’t sound like God. It is funny, satirical, bold… it’s just not from the heart of God; it’s something out of Elijah’s heart (an unmet need). When we function in the power of God and misrepresent the heart of God, we open a door for Jezebel’s accusations to stick.

The same thing happened to Moses. God asked him to speak to the rock and give water to Israel as a sign. Moses smote the rock with his staff. The miracle happened and water came out, but Moses’ actions suggested that God was angry with His people when He wasn’t. Moses lived out His life and died in the wilderness. God wouldn’t let him go into the promised land, and Joshua replace his ministry (Num 20:10-12, Deut 3:26-27). There was even warfare over Moses’ body! Notice how careful the angel is not to speak to the enemy outside the limits of his assignment.

But even the archangel Michael, when he was disputing with the devil about the body of Moses, did not dare to bring a slanderous accusation against him, but said, “The Lord rebuke you!” Jude 9 NIV

Humility – The prophetic and miraculous exploits that lie ahead of each of us are wonderful. Warfare is a real part of ministry in the Kingdom. Humility and a fear of the Lord (respect) are safeguards. The spirit of Jezebel operates on independence, arrogance, and temptation… whenever we use the anointing to minister to ourselves. When we step outside the boundaries of our assignment or our metron, we open a door for her accusations to stick. Notice how Jesus linked exploits and humility.

“If you have faith as small as a mustard seed, you can say to this mulberry tree, ‘Be uprooted and planted in the sea,’ and it will obey you. 7 “Suppose one of you had a servant plowing or looking after the sheep. Would he say to the servant when he comes in from the field, ‘Come along now and sit down to eat’? 8 Would he not rather say, ‘Prepare my supper, get yourself ready and wait on me while I eat and drink; after that you may eat and drink’? 9 Would he thank the servant because he did what he was told to do? 10 So you also, when you have done everything you were told to do, should say, ‘We are unworthy servants; we have only done our duty.’”  Luke 17:6-10 NIV

Paul made the same point. Staying inside our metron is protection from Jezebel. We don’t underestimate our gift (false humility) or use our mantle to minister to our ego.

For by the grace given me I say to every one of you: Do not think of yourself more highly than you ought, but rather think of yourself with sober judgment, in accordance with the measure of faith (metron) God has given you. Rom 12:3 NIV

We have different gifts, according to the grace given us. If a man’s gift is prophesying, let him use it in proportion to his faith. Rom 12:6 NIV

Dealing with Jezebel – Elisha anointed Jehu as King of Israel and Jezebel became his assignment. Notice when Jehu comes after her that she fixes herself up to look good (temptation) and calls him Zimri. Why? Zimri was an official who overthrew and killed his king, Asa, and was overwhelmed by his enemies, and committed suicide seven days later (1 Kgs 16). Jezebel, as the King’s wife, is making one last accusation trying to intimidate Jehu. Jehu doesn’t take the bait. He doesn’t taunt her back…. nothing theatrical. He just does his job… in the name of Jesus.

Repentance – You and I have operated in great anointing prophetically and practically. We have also stepped over that line and added some things that were not from God. It’s rooted in a lack of respect for God; a lack of wisdom. It’s also reaped some accusations from Jezebel. To represent God before many people with many words and many actions, we also have to come before the Lord “continually” in repentance and humility and ask him to wash us white as snow again and ask the Holy Spirit to teach us to be aware of our assignments, our metron, and to represent Jesus in purity and holiness. We can never minister to others in order to satisfy a need in our own hearts… it misrepresents Him. Our cup is filled in private. We minister in public out of the overflow. Our position in private and in public is always “in Christ.”

That foundation is freedom from intimidation, freedom from the fear of men, freedom to get past Jezebel’s accusations, and freedom to be ourselves in Christ with amazing boldness and anointing that goes far beyond our own gifting and faith. The fear of the Lord is the beginning of wisdom. It’s wise to win souls, do exploits in Jesus’ name and build the Kingdom with zeal and have fun doing it. There is no other way to live. This is not the hour to be passive or quiet or fearful. This is the hour to say “yes, Lord,” and get in the game and contend for the desires that God has written in our hearts.

Note: This emphasis started through a friend who suggested this video. It’s 90 minutes long, but worth it. 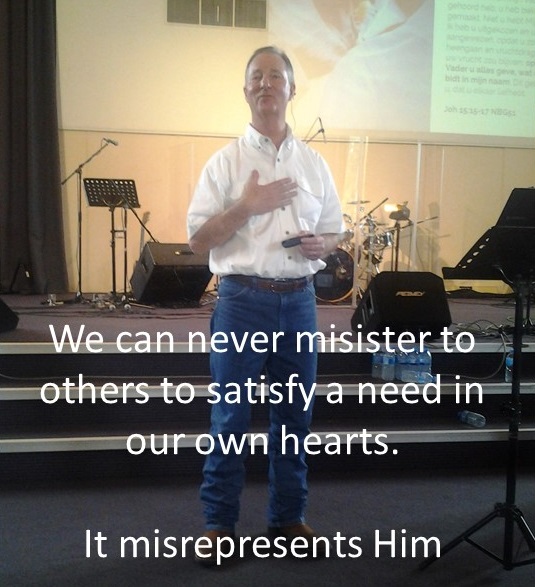