Fifty years ago, President Lyndon B. Johnson launched the War on Poverty. Since then, US taxpayers have spent more than $22 trillion fighting Johnson’s war, three times the cost of all military wars in U.S. history. Currently in the US, about 35% of the population qualifies for and receives government benefits based on their income.

The drumbeat of the social welfare paradigm in politics and the church is that we all have a responsibility to help the poor. When Jesus spoke about the poor, there was a subtle distinction between those in need and those who had a hunger to change. The failure of socialism and the modern welfare state is losing that distinction. The rich have always gotten richer, and the poor have always gotten poorer… for a very simple reason. Some listen to wisdom from the Lord, and some don’t. Some are open to personal change and some aren’t. That’s why Jesus himself said, “The poor will be with you always.”

Whoever has will be given more, and he will have an abundance. Whoever does not have, even what he has will be taken from him. 13 This is why I speak to them in parables: “Though seeing, they do not see; though hearing, they do not hear or understand. Matt 13:12-13 NIV

Therefore consider carefully how you listen. Whoever has will be given more; whoever does not have, even what he thinks he has will be taken from him.” Luke 8:16 NIV

Abundance – Abundance is for everyone. Jesus came that we might have life and have it abundantly in every area… health, relationships, purpose, family and finances. The real question is “How do we receive help?” and “How do we help others?” More specifically, “Who should we try to help?”

“Poor in Spirit” is the terminology Jesus used to identify those with hearts open to hear and receive abundance. “Poor” and “poor in spirit” are not the same thing at all. All the resources of His Kingdom are available to the poor in spirit. By the same token, money and relationships flow away from those not possessing this trait. Jesus could help some people and He could not help others; it was the people who decided what Jesus could do by the openness of their hearts (faith).

Blessed are the poor in spirit, for theirs is the kingdom of heaven. Matt 5:3 NIV

The blind receive sight, the lame walk, those who have leprosy are cured, the deaf hear, the dead are raised, and the good news is preached to the poor. Matt 11:5 NIV

Where then did this man get all these things?” 57 And they took offense at him. But Jesus said to them, “Only in his hometown and in his own house is a prophet without honor.”  58 And he did not do many miracles there because of their lack of faith. Matt 13:56-58 NIV

Who can we help? – Being poor in spirit is simply the personal recognition that “I” need help. It is the attitude of heart that allows us to receive. If that openness to hear is not present, God himself cannot rescue us and we remain in every form of poverty. Giving money and emotion to a poverty mentality of entitlement is putting coins in a pocket with holes. It may keep them alive. It may buy them time. But it will not change anyone and it eventually leads to resentment and rebellion… for very logical reasons – a lifestyle of welfare feels like control; a prison with no way out.

Now this is what the Lord Almighty says: “Give careful thought to your ways. 6 You have planted much, but have harvested little. You eat, but never have enough. You drink, but never have your fill. You put on clothes, but are not warm. You earn wages, only to put them in a purse with holes in it.” Hag 1:5-6 NIV

The leech has two daughters — Give and Give! Prov 30:15 NKJV

People who have abundance are usually the same people who already have mentors, coaches, and team members who support them. Being poor in spirit and being open to receive from God and others is the lifestyle of abundance.

We all need help (rich and poor); that’s not a discriminator. What determines who we can and should help is simply, “Do they want help?” The welfare cultural mindset of poverty is deeply entrenched in blame. Submitting to a heart belief that I am a victim and my solution is blaming others leads to poverty in all of us – it’s unforgiveness, and it reaps consequences.

My “lack” is never someone else’s fault if God is my source. Blaming others is a cancer that has chains. When we “own” our future, others can come alongside us and speed up the process – not before. People on their way to abundance have this simple trait: they want it and are already diligently working toward it. Listen to proverbs:

The lazy man does not roast his game, but the diligent man prizes his possessions. Prov 12:27

The sluggard craves and gets nothing, but the desires of the diligent are fully satisfied. Prov 13:4

The plans of the diligent lead to profit as surely as haste leads to poverty. Prov 21:5 NIV

The fruit – When we own our future, show diligence in working toward abundance, and recognize our personal need for help… it’s easy to make money, it’s easy to cultivate relationships, it’s easy to stay healthy, it’s easy to receive God’s favor in every area of our lives.

When we find those three ingredients in other people, it’s easy to help them.

But he gives us more grace. That is why Scripture says: “God opposes the proud but gives grace to the humble.” James 4:6 NIV

Practical application – Before we can share the gospel, give advice, coach, teach or lead, we have to do one thing; hear that person’s heart to understand what they want in that moment. They won’t receive anything else… no matter what we have to give or how badly we want to exercise our gift. 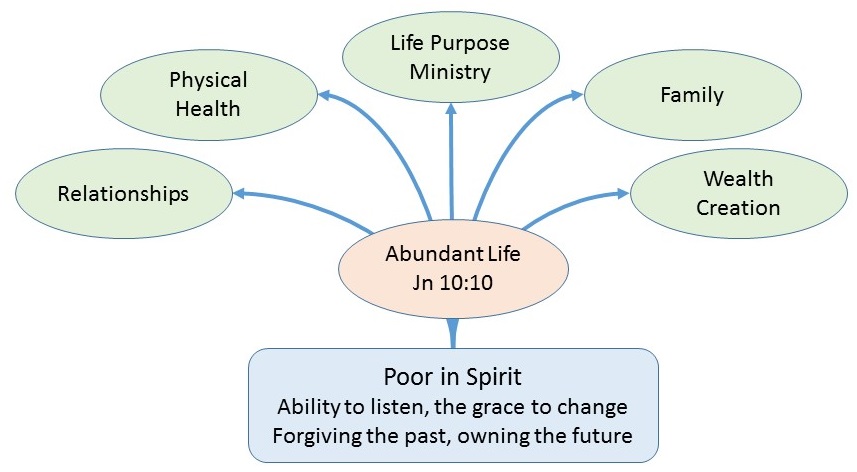